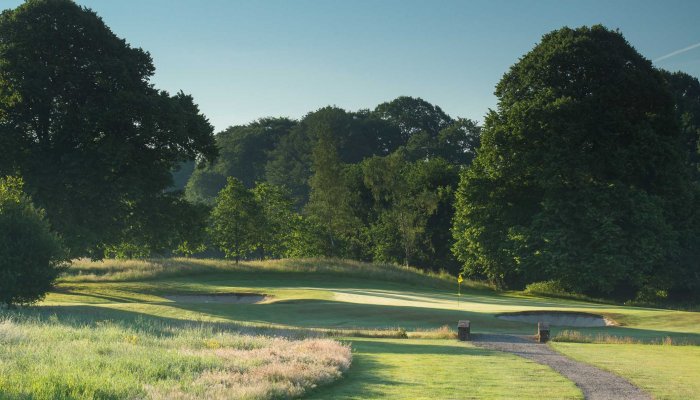 Through The Niuc Gavin McClements playing with a handicap of five held a one point advantage over Paul Hughes (5) and Willie Park (4). Brian Mahany (5) ('ding' at the Trout Hole) and Tony Carroll (2) were another point behind. McClements bogeyed Broadmeadows and was joined in the lead by Park with a par. Hughes and Carroll were a point behind with Mahany another point back. In a very close finish McClements and Park parred both The Treasury and the Sanctuary to remain in the lead with only Longlands left to play. Could the front runners hold on with pressure building up behind? Hughes (two pars) and Carroll (birdie, par) were a point behind and were joined by Mahany (par, birdie). McClements birdied Longlands to win by one point from Park (par), Hughes (birdie), Carroll (birdie) and Mahany (birdie)who finished together. Second place went to Mahany with a better last six with Hughes taking third place with a better last three.

Carroll won the Gross with 20 gr/pts.

Approaching The Niuc Jonathan Larmour (10) and Aidan Donnelly (10) were setting the early pace a point ahead of John Caulfield (10) with Jonathan Keys (6) a further two points behind. Donnelly after two pars and a bogey at Broadmeadows emerged as the single leader by a point from Larmour (par, birdie, 'ding') and Caulfield (par, bogey, par). Keys (two pars and a bogey) was still in contention a further two points back. Caulfield parred The Treasury and birdied the Sanctuary to take the lead by one point over Larmour (two pars). Another point behind came Donnelly (two bogeys) with Keys (two pars) a further two points down. Disaster for Caulfield at the last when he failed to score and was overtaken by Larmour with a par to win by two points from Donnelly (bogey), Keys (birdie) and Caulfield. Second place was taken by Jonathan Keys with a better last six and Caulfield with a better last six came third.

Through The Maple David Halliday (5) held a slender one point advantage over Chris Lawton (-1) with Michael McAuley (7) another two points behind. Up the Grove Halliday after three pars was still leading by one point from Lawton (birdie and two pars) and an improving McAuley (three pars). Halliday increased his lead over the closing two holes with a bogey, birdie finish to win by two points from Lawton (two pars) and McAuley (bogey, par) and with a better last six second place went to McAuley.

This Division was a close affair with only one or two points between the players throughout. Colin Thompson (8) and Garth Wilson (10) were leading by a point approaching The Maple with Ronnie Gilchrist (9) challenging a point behind. Over Beechers and with two bogeys and a par Wilson was leading by a point from Thompson (double bogey, bogey, par) and Gilchrist (double bogey and two pars). Thompson parred the last to win by one point from Wilson (bogey) and Gilchrist (par) and second place was taken by Gilchrist with a better last six.