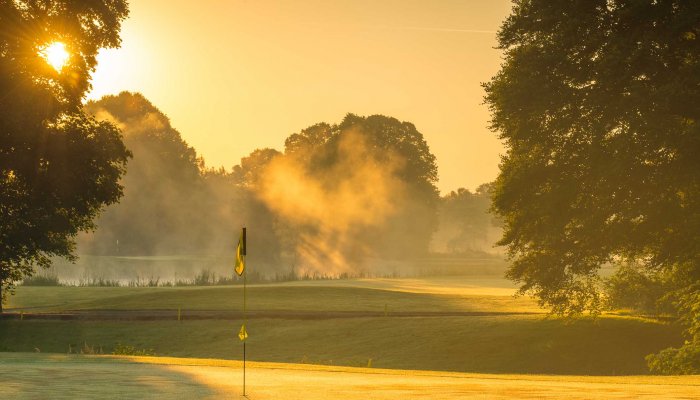 Through the Trout Hole Rory Sempey playing off a reduced handicap of four and Joel McNeilly playing off (-1) were vying for the lead a point ahead of Peter Carron (3) and Paul Campbell (1) with Alan Proctor (4) and Harris Fleming (1) a further point behind. Carron followed up with three pars and joined Sempey (two pars and a double bogey) in the lead by a point over Campbell (birdie, bogey, par), Proctor (two pars and a bogey) and McNeilly (bogey and two pats) down Broadmeadows. Fleming (three pars) was another point behind. In a very close finish over the closing three holes Carron (par, bogey, par), Proctor (three pars) and McNeilly (par and two birdies) finished together and first place went to Proctor with a better last six. Second place went to Carron with a better last six and McNeilly won trhe Gross. There was further excitement for third place between Sempey (two bogeys and a par), Campbell (bogey, par, birdie) and an improving Fleming (birdie and two pars) with third place going to Fleming with a better last six.

Approaching The Niuc tee Nathan Davidson (10) was setting the early pace after opening with a bogey, birdie and a par. Craig Dean (7) and Samuel Bamber (8) were two points behind with Caolan Mullan (9), after opening with a 'ding' another two points back. After Broadmeadows a new leader emerged. A 'ding' by Davidson at Broadmeadows after a par and a bogey enabled Bamber (bogey, birdie, par) to take advantage to lead by two points. Dean (par, bogey, double bogey) and Mullan (bogey and two pars) were another point behind. Dean improved with a par and two birdies to win by one point from Mullan (bogey, birdie, par) with Bamber ('ding', par, bogey) and Davidson (par, double bogey, par) another point behind. Third place went to Bamber with a better last six.

Through The Maple Raymond Steele (12) held a two point advantage over Ronan Speers (13) and Des Cousley (9). Richard Lennox (9) ('ding' at The Maple) was another point behind. Up the Grove Steele after a par and two bogeys was still leading but being hard pressed by an improving Lennox (three pars) a point behind. Cousley (par and two bogeys) was another point back followed by Speers (par and two double bogeys) a further point down. In a very close finish Steele (two double bogeys), Richard Lennox (par, double bogey), Cousley (bogey, par) and Speers (bogey, par) all finished together. First place went to Speers with a better last six and with a better last one second place was taken by Cousley.