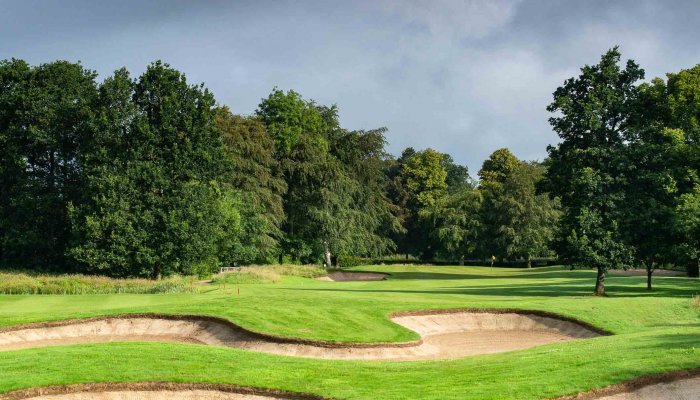 The first competition of the summer season got off to a good start with fine weather and a slight breeze making it an enjoyable day for the Team Classic Salver event played as a 4 Man Better Ball Stableford competition at Galgorm Castle Golf Club.

At Longlands, the halfway stop, Team D (Keith Clements, Simon Finlay, Paul Steenson and Harris Fleming) were leading by three points from Team A (John McCarley, Jim Wilson, Kevin Devlin and William McKigney). Team C (Kurtis McCartney, Peter Moore, Philip Archer and Robbie Purdy) were close up another point behind followed by Team B (Tony Dodds, Paul Hughes, Harkness McCaughan and Finlay Robinson) and Team E (Malachy Kyne, Colin Gray, Gary Jackson and Michael Montgomery) a further one and two points respectively back. The Clements, Finlay, Steenson and Fleming quartet were joined by the McCarley, Wilson, Devlin and McKigney four at The Maple after picking up seven points to their opponents four4 points. The competition was becoming very close and exciting with Team C (McCartney, Moore, Archer and Purdy) and Team B (Dodds, Hughes, McCaughan and Robinson) closing to within one point of the leaders after gaining seven and six points respectively at The Maple. Team E (Kyne, Gray, Jackson and Montgomery) were a further four points adrift. Over Beechers McCarley, Wilson, Devlin and McKigney had opened up a two point lead after recording six points at each of the Devils Elbow and Beechers from Dodds, Hughes, McCaughan and Robinson. A further three points behind came the Clements, Finlay, Steenson and Fleming team and the McCartney, Moore, Archer and Purdy quartet. Kyne, Gray, Jackson and Montgomery were another two points further back. Down the Lowlands and with one hole to play Team A (McCarley, Wilson, Devlin and McKigney) held on to their two point lead over Team B (Dodds, Hughes, McCaughan and Robinson) and an improved Team D (Clements, Finlay, Steenson and Fleming). The McCartney, Moore, Archer and Purdy team were another point behind with the Kyne, Gtay, Jackson and Montgomery four holding on another two points away. Up the eighteenth (Shirleys Cottage) Team A (J.McCarley, J.Wilson, K.Devlin and W.McKigney) with a bogey and a par increased their lead to win by three points. In a very, very close finish for the placings Team B (T.Dodds, P.Hughes, H.McCaughan and F.Robinson) (bogey, par), Team D (K.Clements, S.Finlay, P.Steenson and H.Fleming) (par, bogey) and Team C (K.McCartney, P.Moore, P.Archer and R.Purdy) (par, bogey) finished equal on points. Second place went to T.Dodds, P.Hughes, H.McCaughan and F.Robinsoin with a better back nine with K.McCartney, P.Moore, P.Archer and R.Purdy in third place with a better back nine In fourth place came K.Clements, S.Finlay, P.Steenson and H.Fleming. The M.Kyne, C.Gray, G.Jackson and M.Montgomery 4 Man team finished two points outside the placings.