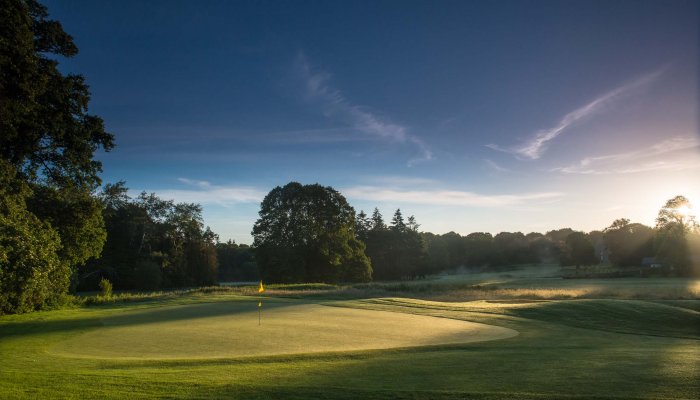 The McCann Trophy sponsored by Carnroe Supplies was played at Galgorm Castle Golf Club under pleasant weather conditions and the course was in good condition thanks to the greenkeepers.

The competition was played as Greensomes and there was also a Stableford Sweep.

At halfway Michael McAuley and Mal Bellew playing off a handicap of fourteen were leading by three points from the Adrian McCart and Gary Crabbe (12) pairing and Philip and Ivan Alexander (14) team. Colin Thompson and Mervyn Foster (13) were another point behind. Through The Maple McCart and Crabbe had closed to within one point of McAuley and Bellew with the Thompson/Foster and the Alexander/Alexander pairings another three points behind.

Over Beechers and up the Grove McAuley and Bellew increased their lead to two points with a par and two bogeys over McCart and Crabbe (two bogeys and a par). Thompson/Foster (par, 'ding', par) and Alexander/Alexander (three bogeys) were a further three points away. McAuley and Bellew increased their lead further over the closing two holes with a par, birdie finish to win overall by five points from McCart and Crabbe (two bogeys). Another point behind came the Thompson/Foster (bogey, birdie) and the Alexander (bogey, birdie) pairings with third place going to Thompson and Foster with a better back nine.

Starting the homeward half Tony Carroll (8) was leading by three points from Stephen Mailey (13). Another two points back came Rory Sempey (10) and Billy Cull (6). Ryan Addley (5) was a further four points down (after 'dings' at the Trout Hole and the Sanctuary). At The Maple Carroll was joined by Mailey in the lead by two points from Sempey. Cull was close up another point behind with Addley another four points back. Mailey after a bogey, par, bogey had opened a lead of two points at Beechers from Carroll (par and two bogeys). Sempey (bogey, par, bogey) was joined by Cull (three pars). Addley with a birdie, par, birdie was a further two points down. Mailey increased his lead over the closing two holes with a bogey, par finish to win by four points from Carroll (two bogeys) and Sempey (par, bogey). Second place went to Sempey with a better back nine with Carroll in third place. A point behind the placings came Addley with two pars and Cull (two bogeys).

After the Front 9 Roy McDowell (28) held a one point advantage over Malachy Graham (25) with Seamus Laverty (15) a further three points behind. Patrick McAleese (17)('dings' at 5 and 6) was another point behind followed by Kevin Duffin (22) ('ding' at Walkers Home) and Damian Gillan (17) ('ding' at The Niuc) one more point down. Approaching the fourteenth tee McDowell was still leading by one point from Graham. Duffin was another four points behind and Gillan a further two points down with McAleese and Laverty ('ding' at The Maple) another point away.

Up the Grove McDowell lost the lead after a bogey, 'ding' at Beechers and a double bogey allowed Graham with a double bogey and two bogeys into the lead by one point. Gillan (two bogeys) was another four points down followed closely by Duffin (bogey and two double bogeys), McAleese (bogey, par, bogey) and Laverty (two bogeys and a par) were a further point behind . Graham bogeyed the final two holes to win by two points from McDowell (bogey, double bogey). In a very close finish for third place Duffin (bogey, par), McAleese (par, bogey, Laverty (bogey, par) and Gillan (two bogeys) all finished together with third place going to Gillan with a better last six.