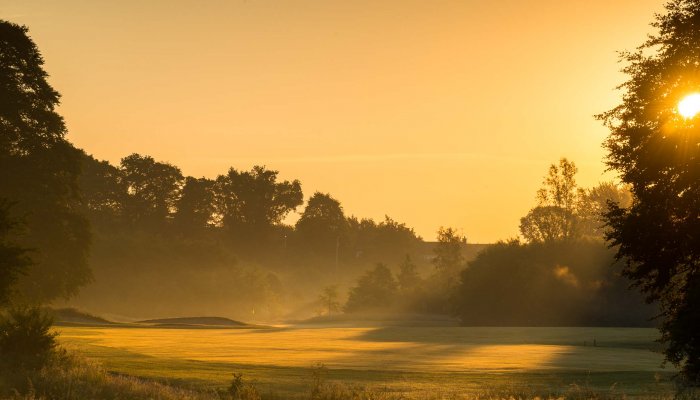 The Final Round of the Eclectic Competition was played at Galgorm Castle Golf Club and provided close encounters at the finish to all the Divisions. The weather held up with plenty of sunshine throughout the day with a fair amount of wind.

Over the river and through The Niuc Darryl Robinson playing off a handicap of six was leading by one point from Steven Penny (Scr). Robinson's opening four holes included two birdies and two pars and Penny recorded two pars, a birdie and an eagle three at the Trout Hole. David Bamford (3) and Alistair McKervill (6) wer e another point behind with David Halliday (4)a further point down. Robinson, Bamford and McKervill were vying for the lead down Broadmeadows a point ahead of Penny ('ding' at Broadmeadowa). Hal;liday was a further point behind. Bamford finished par, birdie, par to win by two points from Penny (two pars and a birdie) who won the Gross. In a close encounter for the placings McKervill (three bogeys), Robinson (par, double bogey, bogey) and an improved Halliday with three pars finished together. Second place went to Halliday with a better last three with McKervill in third place with a better last six.

Approaching Walkers Home Garth Wilson (9) held a slender one point advantage over William Moore (9) and Patrick Reid (7). Leonard Campbell (8), Philip Galloway (7) and Craig Dean (7) were a further one, two and three points respectively behind. At The Treasury Moore and Reid were the new leaders by a point from Galloway. Campbell and Wilson ('ding' at Broadmeadows) were another point behind followed by Dean a further point back. Moore came home par, bogey, par to win by two points and what a contest there was for the placingts with five players involved. Reid two pars and a double bogey), Galloway (bogey and two pars), Campbell (three pars), Wilson (two pars and a bogey) and Dean (birdie and two pars) finished together with Dean taking second place with a better last three. Third place went to Galloway with a better last six.

Approaching The Maple Paul Hughes (6) was leading but was being challenged for the lead by Chris Moore (5), Paul Reid (6) and Tony Carroll (3) a point behind. Mervyn Foster (5) after a 'ding' at Arthurs Seat was another point back. Over Beechers Hughes and Carroll were vying for the lead a point ahead of Moore. Foster and Reid were another point behind. Hughes finished with three pars to win by one point from Moore (bogey, par, birdie). Carroll (two pars and a bogey), Foster (three pars) and Reid (bogey, par, birdie) came in together a point behind the placings,