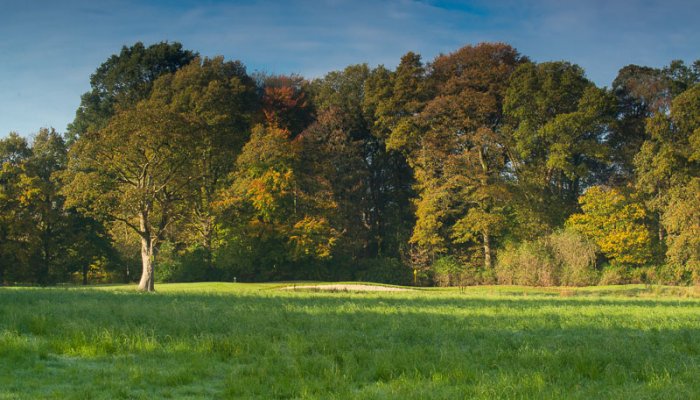 The Second Round of the Russell Stirling Joinery sponsored Winter Championship was played at Galgorm Castle Golf Club. Playing conditions were anything but ideal with the early starters having to cope with heavy intermittent showers

Through The Niuc Wilson McVeigh playing off a handicap of two held a slender one point advantage over Sean McCann (Scr). Chris Cooke (5) and Adrian Atkinson (5) were another point behind with Gary Wilkins (4) a further point down. Down Broadmeadows and approaching The Treasury McVeigh with a par and a bogey was joined in the lead by Wilkins with a par and a birdie. One, two and three points further back came Atkinson (bogey, par), Cooke (two bogeys) and McCann ('ding', par) respectively. Wilkins followed up with two pars and a bogey over the closing three holes to win by one point. There was a very close finish for the placings between Atkinson (par, birdie, 'ding'), Cooke (three pars), McCann (birdie, par, birdie) and McVeigh (bogey and two pars) coming in together. Second place went to MaCann with a better last three and third place was taken by Cooke with a better last three.

Through The Maple Rod Lennox (4), James Mairs (6) and Adrian McCart (4) were vying for the lead. Lennox birdied fourteen to take a one point lead over Mairs and McCart which he held over Beechers. Mairs parred the Grove to draw level with Lennox. McCart (bogey) was a point behind. There was another close finish over the closing two holes. Lennox (par, bogey) and Mairs (bogey, par) finished together and with a bette3r last six first place was taken by Rod Lennox. McCart (bogey, par) finished a point behind the placings.