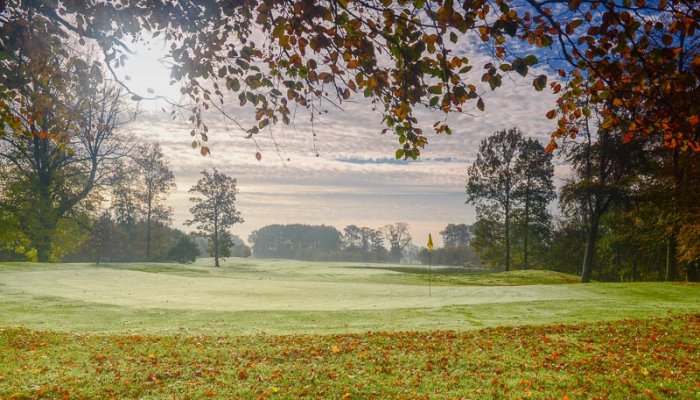 The Winter Championship sponsored by Russell Stirling Joinery commenced with Round 1 at Gal;gorm Castle Golf Club.

In the Front 9 Division 1 through The Niuc John Rock playing off a two handicap held a one point advantage over John McCarry (5). William Glover (5) started with a 'ding' at the first, James Logan (10), Connor McNeill (8) and Gary Jackson were a further two points behind. Down Broadmeadows and approaching The Treasury Rock after two pars was still holding a one point advantage over McCarry (par, bogey). Glover (par, bogey), Logan (par, bogey) and Jackson (par, bogey) were another two points behind with McNeill (two bogeys) a further point down. Rock added another three pars to his total over the closing three holes and held on to win by a point from McCarry (bogey and two pars) in second place. Four players finished together vying for third position - Glover (birdie, par, bogey), Logan (three pars), McNeill (two pars and a birdie) and Jackson (three pars) – and with a better last six third place went to Glover.

There was a very close finish to this Division with only 1 point separating six players.

Approaching the fifth tee Tony Dodds playing off a ten handicap opened briskly with three pars and a bogey to lead by two points from Aaron Pattison (7) and Richard Lennox (8). Michael Adams (6) and William Crawford (13) were another point behind. Kevin Duffin (10), after a 'ding' at the Niuc, was another point down. The six players closed up with only two points separating them. Dodds with three bogeys held a slender one point advantage over Pattison (two pars and a bogey and Crawford (double bogey, bogey, par) through seven with Adams (bogey and two pars), Duffin (par, bogey, par) and Lennox (two bogeys and a par) another point behind. In a very tense finish Pattison (bogey, par), Adams (two pars) and Duffin (two pars) came in together with first place going to Adams with a better last six. Second place went to Duffin with a better last three and Pattison finished in third place. Richard Lennox (par, bogey), Crawford (par, 'ding') and Dodds (double bogey, bogey) finished together a point behind the placings.

Through The Maple Gary Twigg (5) was being hard pressed for the lead by Alastair Murray (6) and Peter Daly (5) a point behind. James Mairs (6) was another point behind. Up the Grove and approaching the Lowlands Murray with a par, bogey, par and Mairs (birdie, bogey, par) had closed to within one point of Twigg (par, birdie, bogey). Daly (bogey and two pars) was another point behind. Murray and Mairs finished together, each with two pars and with a better last six first place went to Mairs with Murray second. Daly (bogey, birdie) and Twigg (two bogeys) also finished together , two points outside the placings.

Approaching the fourteenth tee Kenneth Gregg (9), Ronnie Gilchrist (9) and Jonathan Larmour (10) were vying for the lead. After two pars and a bogey Gregg and Larmour (bogey and two pars were leading by one poinr from Gilchrist (two bogeys and a par) with two holes to play. In another close finish Gregg came in with two pars to win by one point from Larmour (par, bogey) and Gilchrist (two pars) who finished together. Second place went to Gilchrist with a better last six.