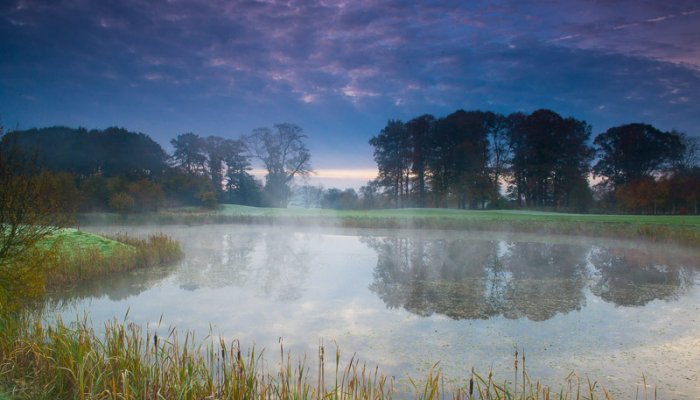 At halfway James Campbell and Aidan Donnelly playing off a combined handicap of twenty three were vying for the lead with Shane McQuillan and John Rock (playing off a combined handicap of five) andColin Black and Daryll Robinson (combined handicap fifteen) but being hotly pursued a point behind by Peter Daly and Patrick Reid (off fourteen) and Alastair Murray and Brian Watt (playing off seventeen). David Halliday and Adrian Adams (eleven) were another five points behind. Through the Maple McQuillan and Rock were joined in the lead by Daly and Reid, two polints ahead of the Murray/Watt pairing and Campbell and Donnelly who lost ground due to recording a 'ding' at the Maple. The Black/Robinson and Halliday/Adams combinations were a further one and two points respectively behind. After a run of par, double bogey and a bogey Daly and Reid held a two point advantage over the Black/Robinson (two bogeys and a par), Campbell/Donnelly (par, double bogey, bogey), Murray/ Watt (double bogey, par, bogey) and McQuillan/Rock (bogey, par, bogey) pairings. Halliday and Adams (two pars and a bogey) were another point behind with two holes to play. P.Daly and P.Reid with a par, bogey finish held on to win by a point from the C.Black/D.Robinson (bogey, par),J.Campbell/A.Donnelly (two bogeys) and an improved D.Halliday/A.Adams (birdie, par) pairings. Second place went to D.Halliday and A.Adams with a better back nine. In third place was C.Black and D.Robinson with a better last six and J.Campbell and A.Donnelly finished in fourth place. A.Murray and B.Watt (double bogey, par) and S.McQuillan and J.Rock (par, bogey) finished another point behind the placings.

After the front nine Michael Montgomery playing off a twenty three handicap held a narrow one point advantage over Patrick Coleman (9). Samuel |Bamber (20) and Clifford Irvine (18) were another one and two points respectively further behind. Approaching the fourteenth tee Montgomery and Bamber were a point ahead of Coleman. Irvine was a further four points back. Bamber upped the pace with a bogey and two pars to lead by one point up the Grove from Montgomery (par and two bogeys). Coleman (two pars and a bogey) was another two points behind with an improving Irvine (par, birdie, bogey) another point away. Over the closing two holes Montgomery with a triple bogey, bogey and Coleman (two pars) finished together and with a better back nine first place went to Coleman. Bamber (double bogey, 'ding') and Irvine (par and a bogey) finished a point behind and with a better back nine third place went to Irvine.

Only one point separated five golfers at the finish. Through Arthurs Seat ten handicapper Daniel McIlroy was leading by two points from Gareth Marcus (5) and Raymond Steele (12). Adrian McCart (4) was another point behind followed by Ronnie Gilchrist (9) ('ding' at Arthurs Seat). McIlroy increased his lead over Beechers. Marcus was two points behind with Gilchrist and McCart another point behind. Steele was a further point back. N a close finish McIlroy ('ding' and two bogeys) and Marcus (bogey, par, bogey) came in together and with a better last six first place went to Marcus with McIlroy second. Gilchrist (par, double bogey, bogey), McCart (par and two bogeys) and Steele (three bogeys) finished together a point outside the placings.