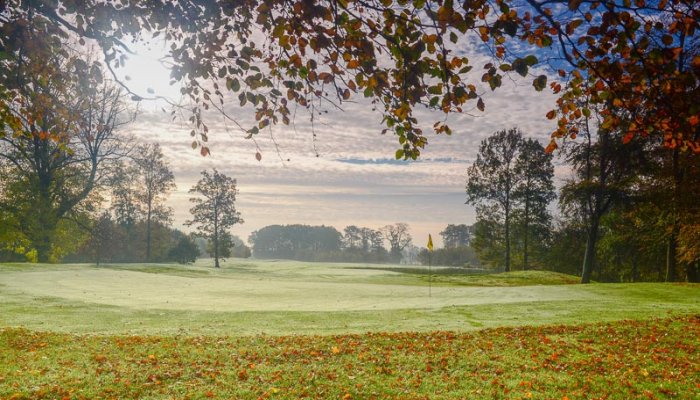 The Heron Trophy was played as a 2 Ball Betterball Stableford at Galgorm Castle Golf Club and after a very competitive competition only two points separated six teams.

At halfway the Rory Sempey (9) and Aaron Pattison (16) partnership were vying for the lead with the Rory Drysdale (19) and Crawford Clements (25) pairing but were being hard pressed by Adrian Adams (9) and David Halliday (10) a point behind. The Peter McMullan (8)/Jonathan Murray (3), Brian Watt (24)/Patrick Reid (18) and Keith Clements (8)/Graham Murray (20) pairings were a further one, two and three points respectively behind.

Through The Maple Adams and Halliday had joined Drysdale and C.Clements in the lead but were being closely challenged by the Sempey/Pattison, Watt/Reid and McMullan/J.Murray partnerships a point behind. K.Clements and G.Murray were very much in contention another point behind.

Up the Grove, after a par, birdie, bogey, Drysdale and C.Clements emerged as the new leaders, a point ahead of Adams and Halliday (two pars and a birdie). Another point behind after recording a bogey and two pars came Sempey and Pattison. The Clements/Murray (par, birdie, par), Watt/Reid (two bogeys and a par) and McMullan/Murray (birdie, par, bogey) pairings were a further point behind.

In a pulsating finish over the closing two holes Sempey and Pattison with two pars and Adams and Halliday with a bogey and a birdie came in together with first place going to the Adams/Halliday partnership with a better back nine. A point behind in third place came Drysdale and C.Clements (bogey, double bogey). Another point behind came K.Clements and G.Murray (two pars), Watt and P.Reid (par, bogey) and McMullan and J.Murray with two pars. The fourth place went to K.Clements and G.Murray with a better back nine.

Ten handicapper Gerard O'Hagan was the clear leader by three points at halfway from Jamie Sutherland (-3). Jamie Surgeonor (2) and Geoffrey Martin (23) were another point behind followed by Laurence Darragh (15) a further point down. Approaching the fourteenth tee O'Hagan had increased his lead to four points over Surgeonor and Martin. Sutherland was another point behind with Darragh a further three points back.

Over Beechers O'Hagan after a bogey and a par was leading by three points from Surgeoner (birdie, bogey) with Martin (bogey, double bogey), Sutherland (two pars) and Darragh (par, birdie) another point back. Over the closing three holes O'Hagan with a par, bogey, par came in to win by three points from Surgeonor (two pars and a birdie) and Darragh (par, bogey, par). Second place with a better back nine went to Darragh and Surgeonor finished in third place. Three further points behind the placings came Martin ('ding', par, double bogey) and Sutherland (par, 'ding', birdie).