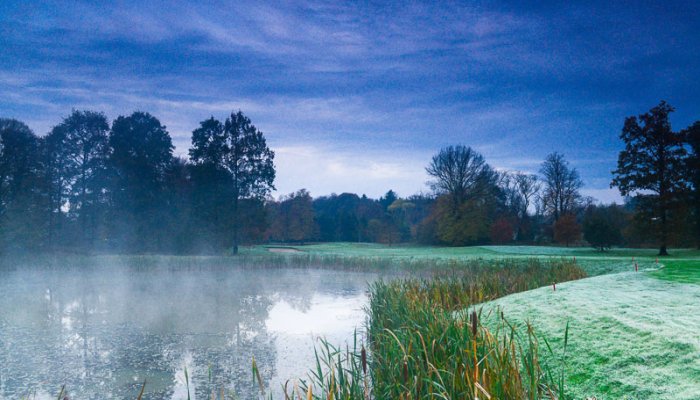 At halfway Patrick Reid (15) and Brian Watt (20) were leading by four shots from James Taylor (7) and Norman Nicholl (8). Conor Gillan (8) and his playing partner Vincent Miskelly (Scr) and the Malachy Kyne (19)/Michael Montgomery pairing were another shot behind. A further shot back came the Harkness McCaughan (20)/Paul Hughes (12) and Andrew Young (19)/Malcolm Sharpe (20) pairings.

Reid and Watt had increased their lead to five shots through The Maple ovet Taylor and Nicholl. The Gillan/Miskelly and Kyne/Montgomery combinations were also five shots behind. The Young/Sharpe and McCaughan/Hughes partnerships were another one and two shots respectively further back. Kyne and Montgomery parred fourteen and fifteen to close to within two shots of Reid and Watt who recorded a bogey and a double bogey. Two pars from the Gillan/Miskelly duo were another shot behind and a further shot down were Young and Sharpe after a par and a bogey. McCaughan and Hughes (bogey, par) and Taylor and Nicholl with a bogey and a par were down by another shot.

Reid and Watt finished double bogey,par, double bogey and held on to win by two shots for a Nett 63. There was a very close finish for the placings with five pairings with the same score. Kyne and Montgomery (two bogeys and a double bogey), Gillan and Miskelly (par, birdie, bogey), Young and Sharpe (bogey, par, bogey), M:cCaughan and Hughes (three pars) and Taylor and Nicholl (bogey, birdie, par) finished with a Nett 65. Second place went to McCaughan and Hughes with a better back six. Third place was taken by Young and Sharpe with a better back nine and Gillan and Miskelly with a better last three finished in fourth place.

There was a very close finish to the above competition. At halfway fourteen handicapper Alastair Murray held a slender one point advantage over Barry Agnew (10) and Michael Adams (15) with Cameron Lappin (3) and Michael Burton (20) another point behind. Billy Cull (5) was a further point down. Through The Maple Murray had increased his lead to three points over Lappin. Another point behind came Agnew and Adams with Cull and Burton close up a further point down.

After a bogey and two pars Adams had closed to within one point of Murray (bogey, 'ding', par) over Beechers. Agnew (par, bogey, par) and Burton (par and two bogeys) were another two points behind with Lappin ('ding' and two pars) and Cull (bogey and two pars) another one and two points respectrively further back. Murray failed to score at the last after a bogey at the Lowlands but held on to win by one point from Agnew (double bogey, birdie) and in a closer finish for third place, Adams ran into bogey trouble and after a double bogey at the Lowlands failed to score at the last; Burton (double bogey, bogey), Lappin (two pars and Cull (two pars) finished together and with a better back nine third place went to Cull.