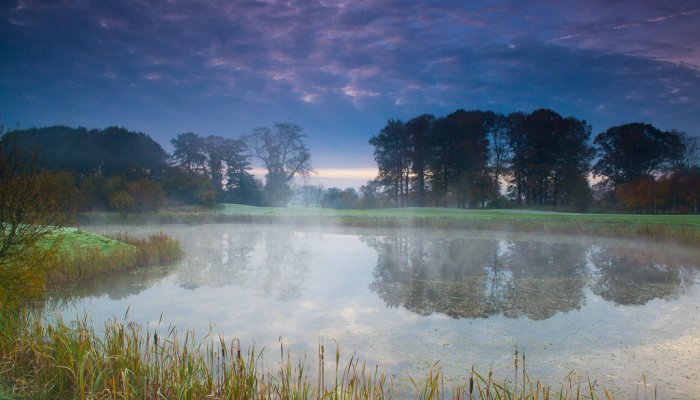 The two Competitions (Front 9 Sweep and Back 9 Sweep) continued at Galgorm Castle Golf Club. The weatrher conditions for the golfers was dry but cold.

In Division 1 through The Niuc Peter Houston (1) and Adrian Adams (5) were leading by a point from Johnny McCart (5). Adrian McCart (3) ('ding' at the opening hole) and William Hammond (4) ('ding' at the first hole) were one and two points further behind respectively. Approaching The Treasury Adams, after two pars, had taken a one point lead over Houston (birdie, par) who was joined by J.McCart (two pars). Hammond (two pars) and A.McCart (birdie, bogey) were another two points behind. Two holes further on there was a threeway tie with one hole left to play. Adams (par, bogey), Peter Houston (par, birdie) and J.McCart (two pars) were leading by two points from Hammond (two pars) and A.McCart (two pars). What a finish down Longlands! Houston birdied the last to win by one point from Adams (par). J.McCart bogeyed the last and was joined by Hammond (birdie) and A.McCart (birdie) a further point behind and with a better last six, third place went to Hammond.

Through The Maple in Division 1 David Gault (6) held a two point advantage over David McIlroy (7) and David Bamford (3). Chris Cooke (6) and James Mairs (5) were another point behind with Harry Cook (7) a further two points back. Cooke with a run of two pars and a birdie, Gault ('ding', bogey, birdie) and McIlroy (bogey, birdie, bogey) were vying for the lead two points clear of Cook (three pars), Mairs (three pars) and Bamford (three pars). Cooke finished with two bogeys and Gault with a bogey and a 'ding' leaving the way open for McIlroy who took advantage with two pars to win by one point from Gault in second place and Cooke another point behind in third place. Two points further back Cook (two bogeys), Mairs (par, 'ding') and Bamford (two bogeys) finished together.

In Division 2 approaching the fourteenth tee Philip Magill (8) and Gavin McClements (8) were trying hard to draw level with the leader John McClintock (9) who held a one point advantage. Chris Lawton (-1) was another two points behind. Up the Grove McClintock (bogey, par, bogey) was joined by Magill (bogey and two pars) and McClements (par, bogey, par) a point ahead of Lawton (three birdies). In a close finish over the closing two holes McClintock with two pars won by one point from Magill (par, bogey) with McClements (two bogeys) and Lawton (par, birdie) another point behind. Third place went to McClements with Lawton winning theGross.