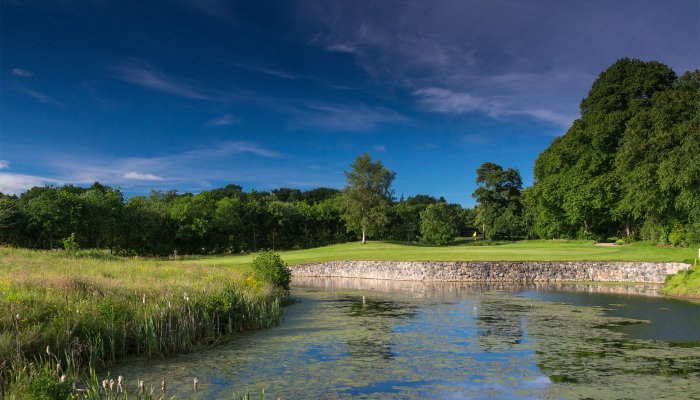 There were close finishes to all Divisions in the 18 Hole Sweep Competition played at Galgorm Castle Golf Club. In Division 1 at halfway six handicapper Jordan Millar held a comfortable four point advantage over Wilson McVeigh (7) and Peter Houston (5). Joel McNeilly (4) and James Donaghy (3) were another point behind with Jonathan Murray (5) a further three points away.

Through The Maple McNeilly and Donaghy had closed to within two points of Millar. McVeigh and Houston were another point behind followed by Murray three points further back. Donaghy, after a par, birdie, par had drawn level with Millar (bogey, par, bogey) up the Grove. Two points back came McNeilly (bogey, par, bogey), McVeigh (par, bogey, par) and Houston (three pars). Murray (bogey and two pars) was three points further back. In a close finish over the closing two holes Jordan Millar with two pars held on to Win Overall by one point from Donaghy (two pars) and a fast finishing McNeilly (two birdies). McNeilly with a better last three took the Overall Runner-up placing and Donaghy won Division 1. A point behind came McVeigh (bogey, birdie) to take second place. Jonathan Murray (par, birdie) and Peter Houston (par, 'ding') were a further two points back with third place going to Murray with a better back nine.

In Division 2 at the turn in form Stephen Black (9) was leading by two points from Andy Collins (8). Keith Clements (10) was another three points behind with Aidan O'Kane (11) a further point down. Approaching the fourteenth tee Black was still leading by two points from Collins. O'Kane ('ding' at twelve) was another three points behind with Clements a further point back. Black failed to score at fourteen and Collins drew level with a par. The scores remained the same over Beechers with each recording a bogey. However, at this stage they were a point behind O'Kane who had taken the lead with two birdies. Clements (birdie, par) was three points behind the leader. Down the Lowlands Collins after two pars was leading by a point from Black (par, bogey) and O'Kane (par, double bogey). Clements (par, bogey) was another two points behind but still in contention. Things changed dramatically at the last when both Collins and O'Kane failed to score. This let in Black with a par to win by one point from Collins in second place. Another point behind, O'Kane and Clements (par) finished together with third place going to O'Kane with a better back nine.

Approaching the back nine in Division 3 Rory Drysdale (17) was being hard pressed for the lead by Colin Thompson (16) a point behind. Brian Mahany (12) and Adrian Atkinson (14) were another point down. Owen Elliott 15) was a further three points back. Drysdale was leading Thompson ('ding' at The Maple), Atkinson and Mahany by three points through The Maple. Elliott was another three points behind. Drysdale continued to lead after a bogey at fourteen and a double bogey over Beechers by a reduced two points from Atkinson with a 'ding' at fourteen and a birdie at Beechers and Mahany who bogeyed fourteen and parred Beechers. Thompson (bogey and double bogey) and an improved Elliott (two pars) were another point behind. Atkinson finished strongly with a par, bogey, and a par to win by one point from Drysdale who ran into bogey trouble to finish bogey, 'ding' and another bogey to take second place. Mahany also landed in bogey trouble with a bogey up the Grove, a double bogey at the Lowlands and another bogey at eighteen and was joined by Thompson (par, 'ding', bogey) and Elliott (double bogey and two bogeys). Third place went to Elliott with a better back nine

Through The Niuc Rod Lennox (10) and Caolan Mullan (23) were leading by a point from Jordan Gaw (7) and Adam Dyer (3). After The Treasury Mullan with a par, double bogey, birdie was the new leader by a point from Lennox (birdie, bogey, par). Gaw (three pars was another point behind with Dyer (two pars and a 'ding') a further three points back. In a very close finish Mullan (two double bogeys) and Lennox (double bogey, par) came in together but Gaw with a bogey, birdie finish won by a point. Rod Lennox took second place with a better last six with Mullan third. Dyer (par, birdie) was another two points behind the placings.

Through The Maple Chris Moore (13) held a one point advantage over Michael Stronge (16) and C.Lawton (2). James McKay (17)was another point behind. Up the Grove Moore after a par and two birdies was leading by three points from Stronge (par, double bogey, par). Lawton (three pars) was another point behind followed by McKay (two bogeys and a double bogey) a further two points back. In a close finish Moore (two bogeys) and Stronge (two pars) were level with first place going to Stronge with a better last six. Lawton (two pars) and McKay (birdie, bogey) finished together three points behind and third place went to McKay with a better last six.