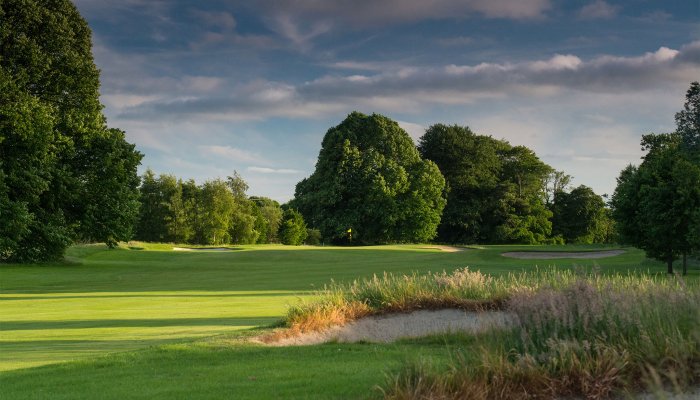 The overall winner of the Saturday Stableford played at Galgorm Castle Golf Club was nine handicapper Stephen Black. He finished two points ahead of overall runner-up Paul Hughes playing off an eleven handicap.

Black opened with two pars and a birdie. He followed this with four pars which gave him a three point advantage over Hughes at The Treasury. Hughes closed to within one point at the next with a birdie to a bogey from Black. Both players bogeyed the Longlands, leaving Black leading by one point at halfway. Black began the back nine with a bogey and two pars followed by two bogeys and a par. Meanwhile Hughes started the back nine with two bogeys followed by a par, bogey and two pars to draw level with Black over Beechers. The scores remained level up the Grove. However a birdie, par finish by Black saw him home to win Overall by two points with Hughes taking a par and a bogey finish to take the Overall Runner-up placing,

In Division 1 at halfway Stephen Black held a commanding four point advantage from Jordan Millar (6). Wilson McVeigh (7) was another point behind followed by Andrew Collins (8) a further point away. Through The Maple Black was four, five and six points respectively clear of McVeigh, Millar and Collins. Approaching the Lowlands tee McVeigh, after a run of two pars and a bogey was three points behind Black. Millar (par and two bogeys) and Collins (bogey, par, bogey) were another three points behind. Black finished birdie, par to Win Overall (see above). McVeigh finished with two pars, four points behind Black and won Division 1. Three points further back came Millar (two pars) and Collins (two pars) with second place going to Collins with a better back nine.

The Gross was won by Jonathan McNeill (1).

After the front nine in Division 2 Paul Hughes (11) (see above) was leading by two points from David Martin (12) and James Mairs (11). George Small was a further point back. Through The Maple Hughes was joined by Mairs, two points ahead of Martin with Small another two points away. Hughes, after scoring a birdie at fourteen and a par at Beechers was leading by two points from Mairs ('ding', birdie). Martin (bogtey, par) was another point back with Small (par, bigey) three points further away. Hughes finished bogey, par, bogey, three points ahead of Mairs (three bogeys) and Martin (two bogeys and a par). With Hughes taking the Overall Runner-up placing, First place in Division 2 went to David Martin with a better back six from Mairs in second place. Small (two pars and a bogey) was a further two points behind and won the Seniors. Mark Hamilton (10), Lyle Foster (12), John McCarry (11) and Stephen Mailey (11) came in together another point behind and third place went to Hamilton with a better back nine.

In Division 3 after the front nine Laurence Darragh (16) was leading but being hard pressed by Craig Dean (18), Colin Black (15) and Clifford Irvine (17) a point behind. John McClintock (18) and Alastair Murray (15) were another two and three points respectively further behind. Through The Maple a new leader emerged with John McClintock leading by a point from Black and Irvine. Dean and Darragh were a further point behind followed by Murray another point down. Up the Grove the lead changed again with Black, after a bogey, par, double bogey, one point ahead of McClintock (two bogeys and a 'ding') and Darragh (two bogeys and a par). Another point behind came Dean (par, bogey, 'ding') followed by Irvine (bogey, double bogey, 'ding') and Murray ('ding', par, bogey). In a very close and exciting finish Murray improved over the closing two holes with two pars to win by one point from Black (double bogey, bogey), McClintock (double bogey, bogey), Darragh (par, 'ding'), Dean (two bogeys) and Irvine (par, bogey). Second place went to John McClintock with a better back nine and Dean took third place with a better last three.

Ian Manson (20) held a two point advantage over Aaron Pattison (24) and Kevin Duffin (21) entering the back nine in Division 4. Approaching The Maple Manson had increased his lead to five points. Over Beechers Pattison, after a run of two pars and a double bogey had closed to within two points of Manson, who, after a par at The Maple hit bogey trouble with double bogeys at fourteen and Beechers. Duffin (three bogeys) was another point behind with three to play. Manson double bogeyed the Grove , bogeyed the Lowlands and finished with another bogey at eighteen to win by two points from Pattison who bogeyed the Grove and the Lowlands to draw level with Manson. Pattison 'dinged' the last but took second place with Duffin (double bogey, 'ding', bogey) third a further three points behind.