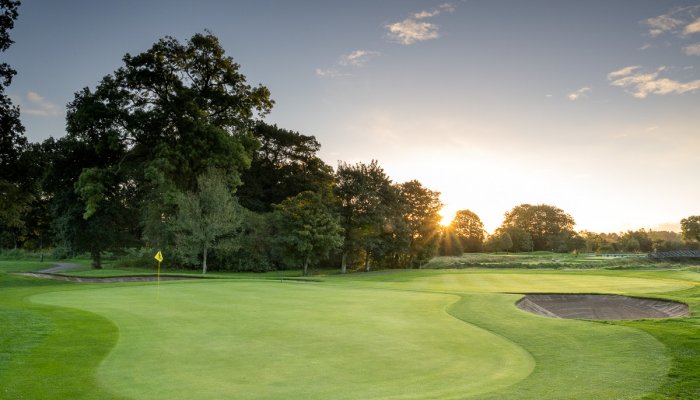 Mervyn Foster, playing off a handicap of thirteen, was the OVERALL WINNER of the Wilsons of Rathkenny sponsored Stableford played at Galgorm Castle Golf Club. The OVERALL RUNNER-UP placing, a point behind, went to Samuel Campbell (19) with a better back nine. Equal on points with Campbell were Adam Neeson (10), Paul Reid (12) and Roy McDowell (27) showing how close the finish was. There was a good turn out of golfers for the competition with very close and exciting finishes to all Divisions.

At half way James Taylor (8) held a narrow one point lead over John Rainey (9) with Paul Wilson (2) and John McCarry (9) another two points behind. Through The Maple Taylor had increased his lead to two points over Rainey and an improving Wilson with McCarry another point behind. Taylor bogeyed the Devils Elbow and parred Beechers with Rainey (two pars) and Wilson (two pars) closing to within one point with three holes to play. Could Taylor hold on? McCarry was a further point back and trying hard to catch the front runners. Wilson birdied the Grove and the Lowlands and Rainey had two pars as both players joined Taylor (birdie, bogey). McCarry (two pars) was still one point behind. In a very close finish Rainey birdied the last hole to win by one point from Wilson (biedie) in second place with third place going to Taylor (bogey) another point behind. McCarry (double bogey) was a further two points outside the placings.

Through the Front 9 Aidan O'Kane (10) held a one point advantage over Paul Reid (12). Adam Neeson (10) was another two points back with Mervyn Foster (13) ('ding' at The Treasury) a further two points down. At the Devils Elbow O'Kane was leading by one, two and three points from Reid, Neeson and Foster respectively. Two holes further on O'Kane (par at the Devils Elbow and a bogey at Beechers), Reid (par, bogey) and an improving Foster (birdie, par) were vying for the lead a point ahead of Neeson (two pars). With three holes left to play an exciting finish lay ahead! Reid parred the Grove and bogeyed the final two holes and was joined by Neeson (bogey and two pars). However Foster finished with a bogey and two pars to WIN OVERALL by one point. Neeson with a better back nine won Division 2 with Reid second. Another point behind in third place came O'Kane (three bogeys).

At the start of the Back 9 Joshua Whann (15) held a one point advantage over David Stirling Sen. (16). Three points further back came Samuel Campbell (19) and Sean Mullan (20). At the fourteenth tee Mullan was the new leader by a point from Campbell. Stirling sen. and Whann were another two points behind. Campbell, after a bogey, double bogey, par, was leading by a point at the Lowlands from Mullan ('ding', par, double bogey) and Stirling sen. (two pars and a double bogey). Whann was another point away after three bogeys. Campbell with two pars finished the OVERALL RUNNER-UP with a better back nine. Mullan (bogey, birdie) was a point behind and won Division 3 by a point from Stirling sen. (par, bogey) with Whann (bogey, par) in third place.

Starting the Back 9 Tony Dodds (22) was leading by one, two and three points respectively from Roy McDowell (27), Raymond Lynn (33) and Ian Manson (23) with Brian Mitchell (23) a further three points behind. At the Devils Elbow Dodds had increased his lead to four points over McDowell and Manson. Mitchell was another two points behind with Lynn falling back a further point down after hitting bogey trouble. Dodds parred the Devils Elbow but a 'ding' at Beechers and a double bogey up the Grove saw his lead reduced to one point by Manson with three bogeys. McDowell (bogey, double bogey, bogey) was another point behind. Mitchell (par, 'ding', double bogey) and Lynn (bogey, triple bogey, and a double bogey) were a further three points back. McDowell finished with a par and a bogey to win by one point from Dodds (bogey, double bogey) and Manson (two bogeys). Second place went to Manson with a better back nine with Dodds in third place. Mitchell and Lynn finished four points behind the placings.