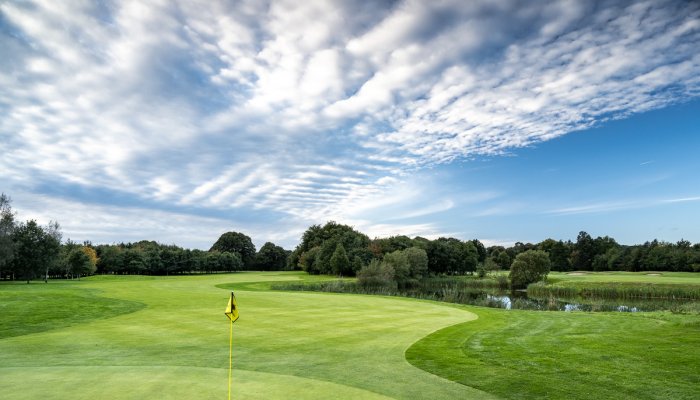 There was an excellent turn-out of golfers for the 25th Anniversary competiition sponsored by Galgorm Spa & Golf Resort and played at Galgorm Castle Golf Club. The weather was very favourable and the course itself was in excellnt condition, again thanks to the greenkeepers. The Overall Winner was John Rock(10) with a better back nine after a very close contest with Sean Muyllan (20) and Steven Penney (2).

At halfway Mullan was two points ahead of Rock with Penney another four points behind. A 'ding' at The Maple by Mullan enabled Rock with a bogey to join him, a point ahead of Penney. With two to play Rock was leading by a point from Mullan and Penney and in a very close finish Rock with a double bogey, birdie and Mullan (two pars) finished together and Rock was the Overall Winner with a better back nine. Mullan was the Overall Runner-up and Penney (two pars) who finished two points behind won Division 1.

At halfway Billy Goodall playing off a handicap of nine held a slender one point advantage over Aaron Brown (3). Steven Penney (2) was another point behind with Wilson McVeigh (9) ('ding' at The Treasury), John Rainery (8) ('ding' at Spences) and Chris Lawton (-1) ('ding' at the opening hole) a further point back. Through The Maple Penney, after two birdies and two pars, was leading by a point from Brown. Goodall ('ding' at The Fort) was another point behind and Rainey and Lawton were a further two points away. McVeigh was another point down. Penney birdied the Devils Elbow amd parred Beechers and held onto his one point advantage over Brown (par, birdie). Goodall (bogey, par) was another three points behind followed by Rainey (bogey, par) and Lawton (par, bogey) a further two points back. McVeigh with a bogey and a par was close up another point away. Penney finished bogey, par, par to win by three points from Brown (par, 'ding', bogey. McVeigh (two bogeys and a par), Rainey (par, 'ding' par), Goodall ('ding' and two bogeys) and Lawton (par, bogey, birdie) finished together another two points behind.. Third place went to McVeigh with a better back six and Lawton won the Gross with 36 gr/pts.

At the turn John Rock (10) was leading by two points from Malachy Bellew (10). Another two points behind came Rod Lennox (11), Norman Nicholl (12) and Paul Hughes (13). Jonny McIlroy (11), after 'dings' at the Sanctuary and Longlands was a further three points behind. Approaching the Devils Elbow Rock was still leading by two points from Bellew. Nicholl ('ding' at Piat) and Hughes ('ding' at Arthurs Seat0 were another two points back and Lennox and McIlroy were a further two p[oints down. Up the Grove and with two holes to play Rock (par, bogey, par) was proving hard to catch and still in the lead. Hughes (three pars) and Bellew (bogey, and two pars) were thre3e3 points behind. Another two points back came McIlroy (bogey and two pars) and Nicholl (three bogeys) with Lennox (three bogeys) a further two points away. Rock finished with a double bogey and a birdie to WIN OVERALL. Four points behind came McIlroy (two pars) and Bellew (two bogeys) with first place in the Division going to McIlroy with a better back nine. Nicholl (double bogey, birdie), Hughes (double bogey, bogey) and an improved Lennox (birdie, par) finished together and third place went to Rod Lennox with a better last six.

After the Front 9 Colin Thompson (15) held a narrow one point lead over Darryl Robinson (15), Neil Fitzsimmons (16) ('ding' at Walkers Home) and Gary Crabbe (16). Graham Martin (17) ('ding' at The Treasury) was two points further behind. After The Maple Robinson was the new leader by a point from Thompson with Martin ('ding' at Piat) another two points back. Fitzsimmons ('ding' at Arthurs Seat) and Crabbe were a further point behind. A 'ding' at the Devils Elbow by Robinson enabled Thompson with a par to regain the lead by two points. Up the Grove and Robinson regained the lead after a bogey and a par. Thompson 'ding' at Beechers followed by a bogey was a point behind. Two points further back came Fitzsimmons (bogey, double bogey, par) and Crabbe (three bogeys) followed by Martin ('ding' , double bogey, bogey) two further points back. Thompson finished with a bogey and a par to join Robinson (double bogey, par) and with a better back nine Robinson won the Division and Thompson won the Seniors. Fitzsimmons came in par, bogey to take second place... Crabbe (two bogeys) and a revived Martin (two pars) finished together with third place going to Martin with a better back nine.

At the start of the Back 9 Sean Mullan (20) had a three point advantage over Raymond Lynn (33) with Connor White (20) close up another point behind. Don McKeown (20) and Norman McKernan (29) were a further two and three points respectively back. Through the Devils Elbow Mullan ('ding' at The Maple) and Lynn were vying for the lead three points ahead of White ('ding' at The Fort) and McKeown. McKernan ('ding' at the Devils Elbow) was another two points away but still in contention. Up the Grove McMullan with a double bogey and a bogey was leading by two points from Lynn (triple bogey, 'ding'), McKeown (par, double bogey), White (double bogey, par) and McKernan (two bogeys). An exciting finish lay ahead! Mullan finished with two pars to take the OVERALL RUNNER-UP placing. Lynn came in par, 'ding' to finish four points behind Mullan and won Division 4 by one point from McKeown (double bogey, bogey), White (double bogey, bogey) and McKernan (double bogey, triple bogey). Second place went to McKernan with a better back nine and third place to McKeown with a better back nine.