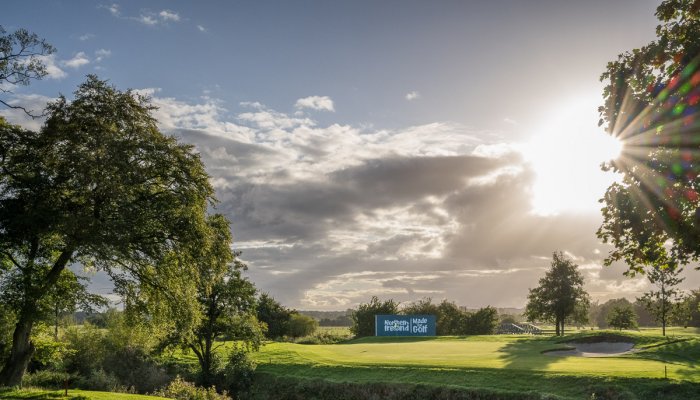 At halfway in the Galgorm Dental sponsored Stableford played at Galgorm Castle Golf Club Trevor Fleming (8) was leading by one point from David Halliday (11). Josh Nicholl (-3), Gerard O'Hagan (9) and Wilson McVeigh (9) ('ding' at The Niuc) were a further two, three and four points respectively behind. Through The Maple Fleming was still leading by a point from Nicholl. Halliday and an improved McVeigh were another two points behind with O'Hagan a further point down. Up the Grove a new challenger was closing in. Halliday with a run of bogey, birdie, bogey had closed to within one point of the leader, Fleming (two pars and a bogey). Another point back came Nicholl (par, bogey, par) and a further two points behind came McVeigh (bogey, 'ding', par) and O'Hagan (three pars). In a very close finish Halliday came in with two bogeys to win by one point. Fleming lost his chance of winning after a par at the Lowlands followed by a 'ding' at the last, to finish a point behind along with Nicholl (bogey, birdie), McVeigh (two pars) and O'Hagan (bogey, birdie). Second place went to McVeigh with a better back nine and third place to O'Hagan with a better last six. Nicholl won the Gross with 33 gr/pts.

After the Front 9 Colin Black (15) held a one point advantage over George Kernohan (12). Brian Mahany (15) ('ding' at the opening hole), Willie Park (12) ('ding' at Walkers Home) and William Glover (13) were a further two points behind with Darryl Robinson (14) ('ding' at the opening hole) and John O'Kane ('dings' at The Treasury and the Sanctuary) another one and three points respectively behind. At the Devils Elbow Black ('ding' at Arthurs Seat) had increased his lead to two points. Glover ('ding' at Arthurs Seat)was the nearest challenger with Mahany another point behind. Two points further back came Park. Robinson and Kernohan ('ding' at Piat) followed by O'Kane another two points back. Approaching the Lowlands Black (double bogey, bogey) was joined in the lead by an improving Mahany with two pars a point ahead of Glover (double bogey, par). Two points further back came Park (bogey, par) and Kernohan (par, bogey). Robinson (two bogeys) and O'Kane (par, bogey) were a further one and two points behind respectively. Glover finished birdie, bogey to WIN OVERALL. Mahany (double bogey, bogey) came in two points behind to win Division 2, a point ahead of Black (bogey, '[ding') who won the Seniors. Park with a two bogey finish was another point behind and took second place in the Division. A further point behind, Robinson (two bogeys), Kernohan (bogey, double bogey) and O'Kane (par, bogey) finished together with third place going to O'Kane with a better back nine.

Starting the Back 9 Kevin Duffin (21) held a comfortable looking three point advantage over Patrick Reid (19). Martin Abernethy (33) ('ding' at Spences) was another three points behind and Scott McFarland (29) ('dings' at the opening two holes) a further two points back. Approaching the Devils Elbow Duffin ('ding' at Piat) was joined in the lead by Reid. McFarland was improving although four points behind with Abernethy ('ding' at The Maple) another point down. Duffin with a par, 'ding', par was leading by two points at the Grove from Reid (two double bogeys and a bogey) and McFarland (three bogeys). Abernjhethy (double bogey and two bogeys) was close up another point behind. McFarland finished bogey, par to win by one polint from Reid (two pars) in second place. Two points further back came Duffin (bogey, 'ding') and Abernethy (double bogey, bogey) and with a better back nine third place went to Abernethy.