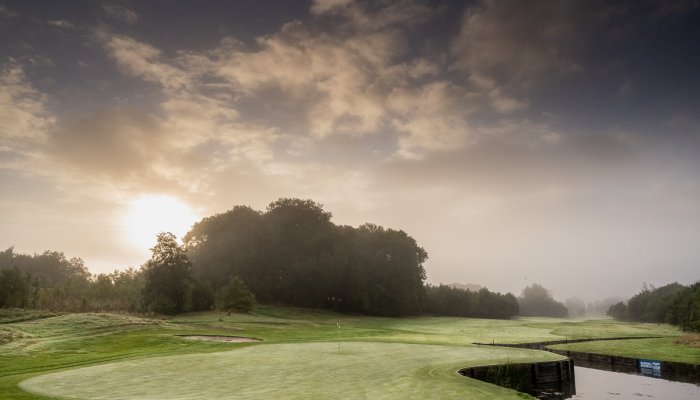 There was an excellent turn out for Mr. Austin McGillion's Presidents Day at Galgorm Castle Golf Club and with pleasant sunny weather and the course in good condition golfers were looking forward to a good days golf. Each player received a 'goody bag' at the start and a hot dog and a drink at half way. The President wished the players a good round of golf before setting off. There was also a Nearest the Pin and Longest Drive Competitions. The Overall Winner was Drew Stewart (BB9) and Lyle Foster the (BB9) the Overall Runner-up

At the halfway stage Matthew Reid (3) and Gavin Homan (-1) were vying foir the lead but being hard pressed by Paul Houston (7), Adam Neeson (9), Sean McElroy (2) and Jordan Hood (-5). Michael Reid (-3) was a further three points behind . Approaching the Devils Elbow Matthew Reid was leading by a point from Neeson, Homan and Hood. Houston and McElroy were a further point behind and Michael Reid another three points down. Up the Grove after three pars Neeson emerged as the new leader a point ahead of Matthew Reid (two pars and a bogey) with Houston ('ding', birdie, par) and Homan (bogey and two pars) a further point down. McElroy (par, bogey, pare) and Hood (two pars and a bogey) were another point behind. Michael Reid (birdie, bogey, birdie) was a further point down. In a very close finish Neeson (double bogey, par), Matthew Reid (par, birdie) and Houston (birdie, par) came in together and with a better back nine Paul Houston won the Division. In second place came Neeson with a better back nine and in third place Matthew Reid. Michael Reid (par, eagle three), McElroy (birdie, par), Homan (two pars) and Hood (par, birdie) finished two points behind. Jordan Hood (-5) won the Gross with 42 gr/pts.

After the Front 9 Lyle Foster (12) was leading by two points from Norman Reid (12) ('ding' at the Trout Hole), Gary Wilkins (10) and Chris Cooke (12) ('ding' at Spences). Through The Maple Foster was one point ahead of Reid and Cooke with Wilkins another two points behind. Approaching the Lowlands Foster , after a bogey and two pars, was leading by two points from Reid (two pars and a bogey). Cooke ('ding' bogey, par) was another point behind followed by Wilkins (bogey, par, bogey) a further two points down. Foster with two bogeys held on to Win Overall Runner-up placing. A point behind came Reid (bogey, par) to win the Division by three points ahead of Cooke (double bogey, bogey) and Wilkins (par, bogey). Second place went to Wilkins with a better last six and Cooke in third place.

Through Longlands George McCooke (14), Harry Cook (14) and Jordan Barnes (15) were vying for the lead with Gary Crabbe (15), Drew Stewart (19) and Damien Agnew (18) another one, two and four points respectively behind. At the fourteenth tee Stewart and Barnes were the joint leaders a point ahead of Crabbe. McCooke ('ding' at Piat), Agnew and Cook were another one, two,and three points respectively further behind. Stewart, after a double bogey at the Devils Elbow followed by a par and a bogey, was still one point ahead of Crabbe (double bogey, par, bogey) approaching the Lowlands. McCooke (bogey, par, bogey) was another point behind and Cook (par, bogey, par) a further point down. Barnes ('dings' at Devils Elbow and Beechers and a bogey) and Agnew (double bogey, and two bogeys) were another point down. Stewart finished bogey, par to Win Overall. Crabbe with two bogeys and McCooke (bogey, par) finished two points behind and with a better back nine Crabbe won Division 3 with McCooke in second place. A point behind came Cook (bogey, par) to win the Seniors. One point further behind came Agnew (birdie, double bogey) and Barnes (bogey, par) with Agnew taking third place with a better back nine.

At The Fort Geoffrey Martin (24) held a narrow one point advantage over Kevin Agnew (29) ('ding' at the opening hole) and Don McKeown (20). Antony Blair (20) ('ding' at the Sanctuary) was another point behind. Through The Maple McKeown and Blair were vying for the lead but being hard pressed by Martin and Agnew a point behind. Up the Grove McKeown (par, 'ding', double bogey) and Agnew ('ding', bogey, double bogey) were leading by two points from Blair ('ding' and two double bogeys) and Martin ('ding', birdie, 'ding'. In a close finish Agnew (triple bogey, bogey) and McKeown (double bogey, par) came in together and with a better last three first place went to Agnew with McKeown second. Two points further back came Blair (double bogey, par) and Martin (double bogey, par) and with a better last nine third place went to Blair.

A very enjoyable day was held by all.

Congratulations to Malachy Bellew who holed his tee shot at the Par 3 Arthurs Seat.