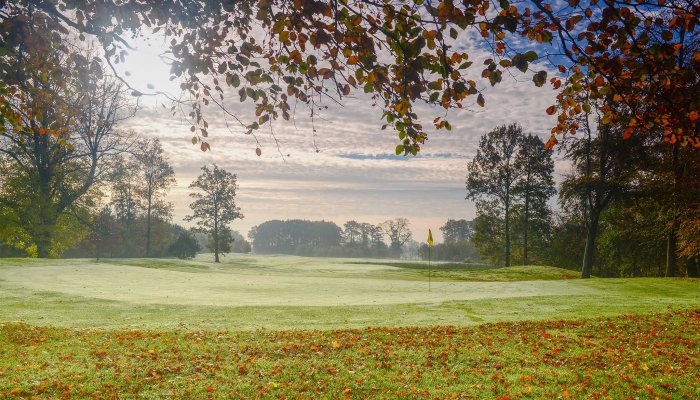 Early starters in the Apeer Doors sponsored Stableford played at Galgorm Castle Golf Club were able to complete their round of golf before persistent rain (heavy at times) caused the 'hooter' to be sounded to abandon play for the remainder of the day.

However a sufficient number of golfers had finished their round to enable a competition of Two Divisions.

In Division 1 at the halfway mark Andrew Moore (12) and Kurtis McCartney (5) were vying for for the lead two points ahead of Harry Cook (15). Gary Jackson (11) and Ricki Simpson (12) were a further two points behind. Approaching The Maple Moore and McCartney were joined by Cook and Simpson, a point ahead of Jackson.

Over Beechers, Moore, after recording a run of par, birdie, par, was leading by a point from Cook (par, bogey, par) with McCartney (three pars), Simpson (bogey and two pars) and Jackson (three pars) another point behind. Moore bogeyed the Grove and parred the Lowlands to increase his lead to two points. Cook (two bogeys), McCartney (two pars) and Simpson (bogey, par) were two points behind followed by Jackson (two bogeys) another point back. In a close finish Moore bogeyed eighteen and came in to win by one point from Cook (bogey) and McCartney (par). Second place went to Cook with a better back nine and third place to McCartney. Simpson (bogey) and Jackson (par) finished together another point behind.

At the turn in Division 2 James Andrews (20) held a one point advantage over Noel McAlynn (18) ('ding' at The Fort) followed by Robin Deane (19), Mark Connaughty (19) and Leonard Campbell (21) a further point behind. Through The Maple a new leader emerged with Campbell leading by a point from Andrews.

Another four points back came Deane and McAlynn with Connaughty a further point behind. Up the Grove Campbell had increased his lead to two points, after a bogey, 'ding', par, over Andrews (bogey, 'ding', bogey). Deane (bogey, par, bogey) and McAlynn (two bogeys and a par) were another point behind with Connaughty (two pars and a 'ding') a further three points away. In an exciting finish Deane improved over the closing two holes and finished with two pars to join Campbell who hit bogey trouble with a bogey and a double bogey. Deane won Division 2 with a better last six with Campbell in second place.