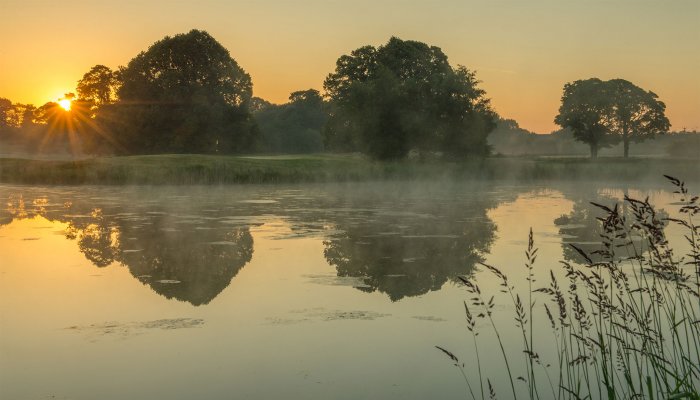 At halfway in the Harry Dunlop Refrigeration Europe sponsored Stableford played at Galgorm Castle Golf Club six handicapper Adam Martin and Philip Magill (17) were leading by a point but being hard pressed by Peter Daly and Nathaniel Steele (5) for the lead. Shane McQuillan (3) and Vincent Miskelly (3) were another point behind, followed by Trevor Fleming (8) and James Donaghy (4) a further point down. Patrick Coleman (9) was another point away. Over Beechers Magill, after a bogey and a par, was leading by a point from Daly (two pars), Steele (bogey, birdie) and Martin (bogey, par). Another point behind came McQuillan (bogey, par) and Miskelly (par, birdie) followed by Coleman (bogey, par) and Fleming (two pars) a further point down. Donaghy after two bogeys was another point back. In a close and exciting finish Magill completed the final three holes bogey, birdie, and a 'ding' at eighteen which gave Daly the opportunity to draw level which he took with a bogey, birdie, bogey finish. P.Daly with a better back nine was the Overall Winner with Magill in the Overall Runner-up placing. Steele (two pars and a 'ding') and Martin (birdie, 'ding' par) finished together two points behind and Steele with a better back nine won Division 1 with Martin in second place.

There was an exciting finish for third place with five players players involved. McQuillan ('ding', par, bogey), Miskelly (bogey and two pars), Coleman (birdie, double bogey, bogey), Fleming (double bogey and two pars) and Donaghy (two pars and a bogey) finished together another point behind. Third place was taken by Coleman with a better back nine. Miskelly won the Gross with a better last six.

There was another close finish to Division 2 with six players separated by only one point. At the turn William Rainey (12) and Alan Proctor (13) were vying for the lead a point ahead of James Mairs (11). Philip Alexander (12), Adrian Atkinson (14) and John McCarry (11) were another one, three and four points respectively further behind. Approaching the Devils Elbow Rainey was leading but being hard pressed by Alexander and Mairs, a point behind. Atkinson and Proctor were a further point down with McCarry another point back. Up the Grove and with two holes left to play Rainey was still leading after two pars and a double bogey. Atkinson (two bogeys and a par) was a point behind and another point behind came Alexander (par, double bogey, bogey). Mairs (par, 'ding', par), Proctor (bogey, double bogey, par) and McCarry (bogey and two pars). What an exciting finish lay ahead! Rainey finished with two bogeys and was joined by Alexander (two pars) and McCarry (two pars) a point ahead of Atkinson (double bogey, par), Mairs (bogey, par) and Proctor who lost his chance of winning after a birdie at the Lowlands and a 'ding' up eighteen. First place went to McCarry with a better back nine and P.Alexander took second place with a better back nine. Rainey finished in third place.

After the front nine in Division 3 Clifford Irvine (18) was leading by three points from Johnny Duffin (17) with Joe Barr (18) another point behind. John McFarland (19) was a further three points back. Approaching the fourteenth tee Irvine was still ahead but his lead had been reduced to one point by Barr. Duffin ('ding' at The Maple) was another point behind with an improving McFarland a further point back. Over Beechers Barr, after two pars, was the new leader but being hard pressed for the lead by McFarland (birdie, par) a point behind. Duffin (birdie, par) was another point behind with Irvine (bogey, 'ding') a further point away. In a close finish Barr came in with thre3e bogeys and was joined by Duffin (double bogey, par, birdie). First place went to Barr with a better back nine. McFarland (double bogey, bogey, par) and Irvine with a late run of two pars and a bogey finished together a point behind. Irvine took third place and McFarland won the Seniors.

Approaching the back nine in Division 4 Bill Hawthorne (26) held a slender one point advantage over Mal Sharpe (23) with Kevin Duffin (22) another point behind. Raymond Lynn (24) and Leonard Campbell (22) were a further three and six points respectively adrift. Reaching The Maple a new leader had emerged. Sharpe was two points ahead of Duffin with Campbell and Hawthorne who ran into bogey trouble a further three points behind. Lynn was another two points back. At the Lowlands tee, Sharpe, with a run of bogey, par, double bogey, was still ahead by one point from Duffin (par and two bogeys). Campbell (bogey, double bogey, par) and Hawthorne (birdie, double bogey, bogey) were a further four points away with Lynn (three bogeys) another two points down. Sharpe 'dinged' at the Lowlands but a bogey at the last saw him home to win by one point from Duffin (two double bogeys). Campbell came with a late run of bogey, par to take third place another point behind. Three points further back Hawthorne and Lynn finished together..