Meeting of the Rivers Trophy 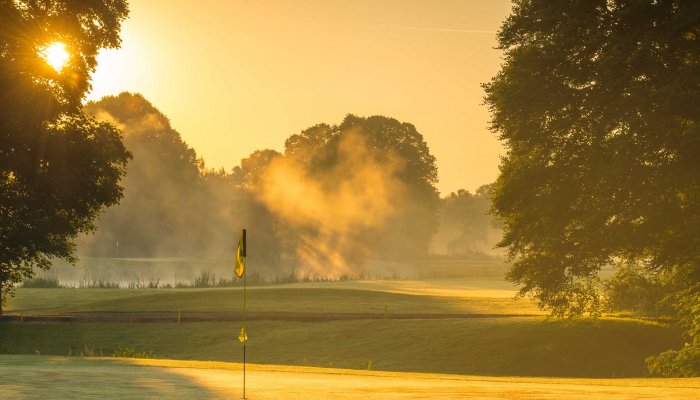 The Meeting of the Rivers Trophy was a Stableford Competition played at Galgorm Castle Golf Club and sponsored by APEER Doors. The day was very wet with persistent rain throughout the day with fewer players taking part.

At the turn Aaron Steele playing off a handicap of eleven was leading by three points from William Rice (11) and Philip Graham (-1) with Jordan Gaw (9) another two points behind. At The Maple, after a good run of four pars, Gaw joined Steele in the lead and an improving Graham was close up a point behind. Rice was a further two points down. Over Beechers Steele with two pars had opened up a lead of two points from Gaw (par, bogey) and Graham (two pars). Rice (two pars) was another point behind. Down Lowlands Steele (bogey, par) increased his lead to four points over Gaw (par, bogey), Graham (two pars) and Rice (bogey, par). Steele with a 'ding' at the final hole saw his lead to two points but he held on to win from Rice (par) and Graham (par). Second place went to Rice and Graham won the Gross with 37 gr/pts. Gaw with a 'ding' at the last hole was another point behind in third place.

At halfway Damien Agnew (18) ('ding' at Broadmeadows) held a slender one point advantage over Stephen Sexton (13). Ivan Alexander (16) ('ding' at the opening hole) and Alan Ellis (19) ('ding' at The Niuc) were another one and two points respectively further behind with John McCarry (12) ('ding' at The Niuc) a further three points down. Through The Maple Sexton emerged as the new leader by two points from Agnew. Ellis was another two points behind with Alexander ('ding' at Arthurs Seat) and McCarry a further two points adrift. Up the Grove and Sexton with a run of bogey, par, bogey was leading by six points from Ellis (par, bogey, double bogey), Agnew (bogey, double bpgey, 'ding'), McCarry (bogey, par, birdie) and Alexander (birdie and two bogeys). A par at the Lowlands and a bogey at the final hole saw Sexton home as the OVERALL WINNER by five points from Alexander (bogey, par) who won Division 2 by a point from Ellis (par, double bogey), Agnew (two bogeys) and McCarry (bogey, par) who finished together. Second place went to Ellis with a better back nine. Agnew came third and McCarry won theSeniors.

After the front 9 Samuel Bamber ('dings at the Sanctuary and Longlands) with a twenty one handicap was holding a one point advantage over Aidan Donnelly (23) and Kevin Agnew (29). Conor Doherty (24) was a further two points behind. Approaching the Devils Elbow Agnew had emerged as the new leader by a one point advantage over Bamber with Donnelly and Doherty another three points back. Agnew lost the lead after a 'ding' at fourteen followed by a double bogey at Beechers. Bamber seized the opportunity with a par and a bogey to take a one point lead over Donnelly (par, birdie). Agnew was another point down followed by Doherty (bogey, double bogey) another three points back. Bamber finished par, bogey, 'ding' to win by three points from Donnelly (double bogey, bogey, 'ding') and Agnew ('ding', double bogey, bogey). With a better back six Donnelly came second with Agnew in third position. Doherty (two bogeys and a double bogey) finished one point behind the placings.