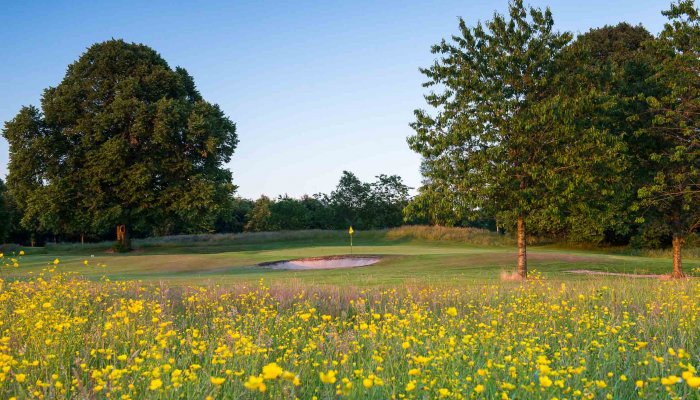 Harris Fleming (8) opened briskly and was leading 4 up at halfway. Kevin McCavera (9) was 2 up and Jordan Hood (-3) 1 up. Neil McCartney (8) was 1 down followed by Adam Martin down another three holes. Approaching the Devils Elbow Fleming and Hood were 2 up followed by McCartney 1 up. McCavera was level par as was a much improved Martin after winning four holes to par. Up the Grove Fleming, after recording a par, bogey, par was leading 2 up with McCartney (birdie, double bogey, bogey), Martin (two pars and a birdie) and McCavera (par, double bogey, par) close up 1 up. Hood was level (par, bogey, par). McCartney finished par, birdie to win OVERALL RUNNER-UP (3 up). Martin (two pars) andFleming (birdie, bogey) came in together 2 up and Martin with a better back nine won Division 1 with Fleming in second place. McCavera (par, bogey and Hood (par, birdie) finished together 1 up. McCavera took third place and Hood won the Gross (4 up).

At the halfway point David Gault (10) was 3 up and being closely followed by Paul Steenson (12) 2 up. Ricki Simpson (11) was 1 up with Ian McCully (12) level par. Approaching the fourteenth tee Gault was still leading (4 up) with new challenger McCully 3 up. Simpson was 2 up followed by Steenson 1 up. Over Beechers McCully with a par and a bogey was still 3 up. Gault dropped to 2 up after a bogey and a double bogey and was joined by Steenson (two pars) improving to 2 up. Simpson remained 2 up after a par at fourteen but lost a hole to drop to 1 up at Beechers. Over the closing three holes McCully finished bogey, par, bogey to WIN OVERALL 4 up. Simpson came with a late run of two bogeys and a birdie to finish 2 up and win Division 2. Gault (bogey, double bogey, par) and Steenson (double bogey, bogey, par) finished together 1 up with second place going to Steenson with a better back nine.

After the front nine Ryan Wiggins (17), James Kennedy O'Shea (18) and Sean Mullan (19) were vying for the lead 2 up, two holes ahead of Jordan Dembinski (16). On reaching The Maple Mullan (3 up) was leading by one hole from O'Shea who was joined by an improving Dembinski (2 up). Wiggins had lost a hole and was 1 up. Over Beechers and up the Grove two new leaders emerged. O'Shea (two bogeys and a par) and Dembinski (par and two bogeys) were 3 up followed by Mullan (two bogeys and a double bogey) 2 up. Wiggins (two bogeys and a double bogey) was another two holes behind. In a very close finish O'Shea had a triple bogey at the Lowlands and a double bogey at the last. He was joined by Dembinski with two double bogeys, Mullan (bogey, triple bogey) and Wiggins (bogey, par).All four players returned 1 up. First place was taken by |Dembinski with a better back nine. Ssecond place went to Wiggins with a better last three and in third place came O'Shea with a better last three.

Entering the Back 9 twenty four handicapper Robert Artt was leading 3 up. Finlay Robinson (22) was 2 up and at 1 up came Aidan Donnelly (23). Conor Murray (29) and Harkness McCaughan (23) were another hole down. At the Devils Elbow Artt was still 3 up but joined by Donnelly and McCaughan. Robinson was 2 up and Murray 1 up. At Beechers Mc Caughan with a bogey and triple bogey was leading 2 up. A hole behind came Donnelly (double bogey, triple bogey), Robinson (bogey, triple bogey) and Artt (triple bogey, double bogey). Murray (triple bogey , double bogey) was another holoe down. There was another close finish to this division.