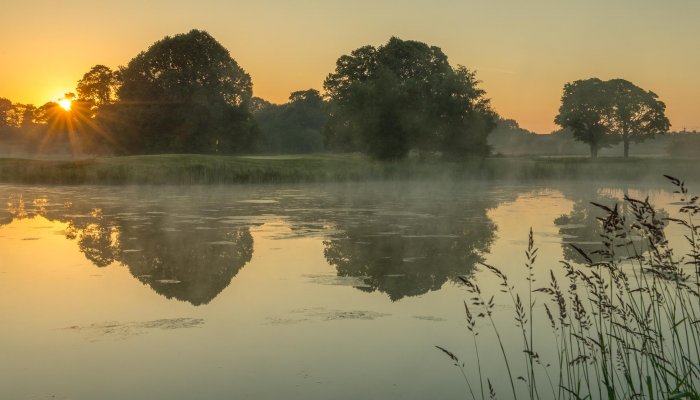 At the turn four handicapper Ryan Addley held a one point advantage over Stephen Black (9) and Sean McCann (4). Paul Houston (4) was another point behind with Stephen McAuley (1) another three points down followed by Trevor Fleming (7) a further point back.

Through The Maple McCann was leading by a point from Addley. Black was another point behind. A further point behind came Houston and McAuley and Fleming was two more points down. After a par and two birdies Addley had regained the lead up the Grove by a point over Black (bogey, par, birdie) with McCann (par, 'ding', par) another point behind. Houston (bogey and two pars) and McAuley (two pars and a bogey) were two points further down and with two pars and a bogey Fleming was closing. Black finished par, birdie to win by one point from Addley with two pars. Three points further back there was a very close finish between McCann (bogey, par), Houston (two pars), McAuley (par, birdie) and an improved Fleming (birdie, par) who came in together. Third place went to Fleming with a better back nine and the Gross was won by McAuley with 35 gr/pts.

After the front nine Jonny McIlroy (10) was leading but being hard pressed by Stephen Logan (12) a point behind. Another point down came Damien Casey (10) and Nicholas Kernohan (13). Aaron Steele (11) and Mark Hamilon (10) were another two and three points respectively behind. McIlroy had increased his lead at Beechers to three points over Logan, Casey and Kernohan. Hamilton was another two points behind and Steele ('ding' at eleven) a further two points back. Over Beechers and up the Grove the field were closing up on the leader. McIlroy failed to score at Beechers and bogeyed the Grove. Kernohan with a par and a double bogey had closed to within one point of McIlroy. Casey (two bogeys) and Logan (double bogey, bogey) were another point behind with Hamilton (bogey, par) and Steele (birdie, bogey a further point down. In a close finish McIlroy came in with two pars and was joined by Casey (par, eagle) and with a better back nine first place went to Casey with McIlroy second. Three points behind in third place came Kernohan (par, 'ding'). Hamilton (par, bogey), Steele (bogey, double bogey) and Logan (two bogeys) finished a point behind the placings.

Entering the back nine William Rice (15) and Mark Wiggins (18) were vying for the lead but being hard pressed by Philip Galloway (17) a point behind and Andrew McKillop (18) another point away. At The Maple Rice was leading by a point from Galloway with Wiggins and McKillop ('ding' at The Fort) a further one and two points respectively behind. Approaching the Lowlands , Rice increased his lead after recording a par, bogey, par to two points over Galloway (double bogey and two pars). Wiggins (par and two bogeys) and McKillop (two bogeys and a par) were a further two points behind with two holes to play. Over the closing two holes Rice increased his lead further with a par, double bogey to finish OVERALL RUNNER-UP four poinhts ahead of Galloway ('ding', bogey). Galloway won Division 3 a point ahead of McKillop (bogey, double bogey) and Wiggins (bogey, double bogey). Second place went to McKillop with a better back nine with Wiggins third.