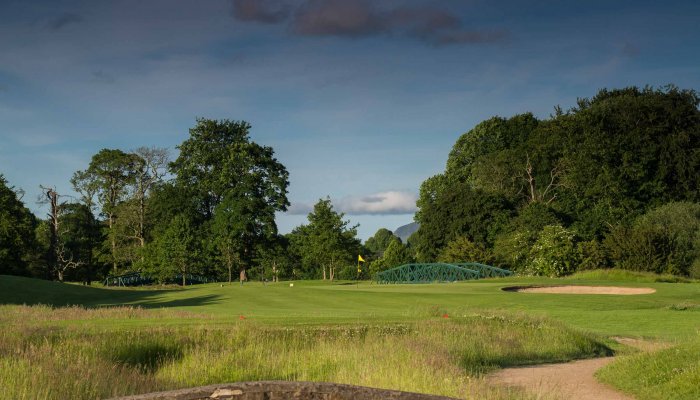 Kaeden Anderson playing off a handicap of one reached the turn in thirty six shots (35 Nett). A further one, two and three shots respectively further behind came Mark Dunlop (5), Jordan Millar (4) and Stephen Black (9). Keith Clements (9) and Neil McCartney (9) were another two shots down. Through the Devils Elbow Anderson was a shot ahead of Millar with Dunlop and Black another shot behind. Clements was four more shots down and McCartney a further one behind. Up the Grove Millar joined the long time leader Anderson two shots in front of Dunlop. Black was a further three shots behind followed by Clements and McCartney another two points back. In a very competitive finish over the closing two holes Millar (par, bogey), Dunlop (two pars and Black (bogey, par) came in together each with a 70 Nett. Millar completed the inward half in thirty six shots, Dunlop thirty eight shots and Black came back in forty shots. First place went to Millar with a better back nine and with a better last two second place was taken by Dunlop and Black finished third. McCartney (bogey, par), Clements (birdie, double bogey) and Anderson finished with a 72 Nett. Anderson won the Gross.

At halfway Ricki Simpson (11) was leading with a one shot advantage over Jonny McIlroy (10) and Billy Goodall (12). Seamus Laverty (15) was another two shots behind. Through The Maple Simpson was still ahead by one shot from Goodall with McIlroy another two shots behind. Laverty was a further four shots back. Up the Grove a new leader emerged. M:cIlroy was the new leader by one shot from Simpson with Goodall another shot behind. Laverty was a further four shots down. In another close finish Simpson finished with a 69 Nett to Win Overall Runner-Up. McIlroy with a 70 Nett won Division 2 and Laverty and Goodall came in together with a 71 Nett. With a better back nine second place went to Laverty with Goodall third.

After the front 9 William Rice (16) was one shot in the lead from Craig Dean (18). Richard Lennox (19) and John Fitzgerald (19) were another four shots behind with Stephen McCabe (18) three more shots further back. At Beechers Dean and Rice were vying for the lead three shots ahead of Lennox. Fitzgerald was another two shots behind followed by McCabe another three shots back. Approaching the Lowlands Dean and Rice had increased their lead to five shots over Lennox and Fitzgerald. McCabe was a further two shots behind. Dean finished birdie, par and with a 65 Nett was the Overall Winner. Rice finished with a 69 Nett to win the Division and Richard Lennox with two bogeys took second place with a 70 Nett. Third place went to Fitzgerald (bogey, double bogey) with a 71 Nett and M cCabe (par, bogey) finished just outside the placings with a 72 Nett.

At halfway in the Subsidiary Stableford Aidan Donnelly (22) was leading by three clear points from Tony Quinn (21) and Brian Watt (21) ('ding' at The Niuc). Tom Wiggins (27) had 'dings' at Spences and The Niuc and was a further seven points down. Through The Maple Donnelly was joined by Quinn and Watt in a threeway tie for the lead. Donnelly lost ground when he failed to score at Beechers, after a bogey at the Devils Elbow and another bogey up the Grove and was trailing by three points behind joint leaders Quinn (two pars and a double bogey) and Watt (two pars and a double bogey). Wiggins with three bogeys was closing but running out of holes with only two to play. In a close fought encounter over the closing two holes Quinn with a par and a double bogey won by one point from Watt who finished with a bogey and a double bogey. Donnelly with two double bogeys came third another four points behind. Wiggins with a strong back nine finished with two bogeys two points outside the placings.