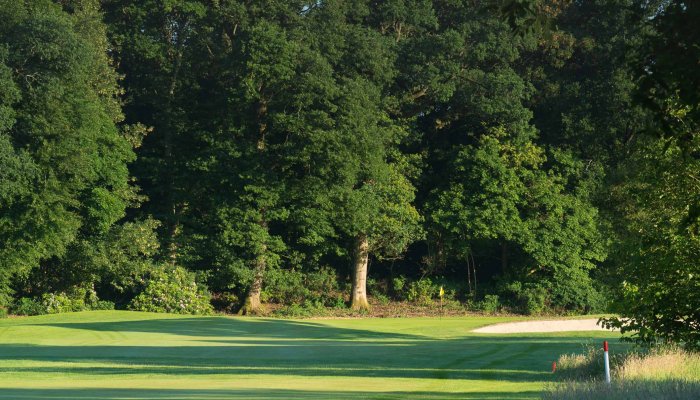 At half way Adam Martin playing off a handicap of seven was leading by two points fromtwo handicapper Steven Penney. George Tumilson (9) was another point behind with Stephen Black (7) ('ding' at the Trout Hole) and Gerard O'Hagan who opened with a 'ding' and had another one at the Sanctuary a further two and three points behind respectively. Through The Maple Martin was joined in the lead by Tumilson, two points ahead of Penney. O.Hagan was another two points behind followed by Black ('ding' at The Fort) a further two points down. Up the Grove and approaching the Lowlands Martin, after two pars and a birdie, was leading by two points from Tumilson (birdie, 'ding', par). Penney (three pars) was another two points behind. O'Hagan and Black were a further point back. Martin finished with two bogeys to WIN OVERALL. Another three points behind came Tumilson (double bogey, bogey) to Win Division 1 by one point from a trio of players – Penney (par, bogey), O'Hagan (bogey, par) and Black (par, bogey). Second place went to O'Hagan with a better back nine and in third place came Black with a better back nine.

In Division 2 at the turn Philip Smyth (10) and David Gault (10) were vying for the lead but being hard pressed by David Bamford (10) a point behind. Cole Hendersen (10) ('ding' at The Treasury) and Philip Alexander (10) were another one and two points respectively further back. At The Maple Gault was leading by a point from Smyth, Hendersen and Alexander with Bamford, after a 'ding' at Arthurs Seat, another two points behind. Over Beechers only one point separated the five golfers. Gault, who was leading, failed to score at the Devils Elbow and parred Beechers where he was joined by Smyth (par, bogey), Hendersen (bogey, par) and Alexander (par, bogey). Bamford (two pars) was only one point in arrears. A close finish lay ahead! Alexander parred the Grove and the Lowlands to take the lead with one to play. A point behind came Hendersen (bogey, par) followed by Smyth (two bogeys) and Bamford (par, bogey) with Gault ('ding' at the Lowlands) another point away. Alexander's lead disappeared after a 'ding' at the last and he was joined by Hendersen with a bogey but with a better back nine Alexander held on to win with Hendersen in second place. There was an exciting finish for third place with Smyth (bogey), Bamford (bogey) and Gault (par) coming in a point behind and third place went to Bamford with a better back nine.

After the front nine Keith Dinsmore (17), Damian Gillan (18) and Graham Simms (14) were vying for the lead three points ahead of Lyle Foster (14) and Jeremy Weir (14). Alistair McKervill (15) was another point behind. Approaching the fourteenth tee Dinsmore was leading by a point from Simms with Gillan and Weir another two points back. Foster and McKervill were a further one and three points respectively down. Up the Grove Dinsmore was still leading after a bogey, birdie, bogey. Three points behind came Gillan (two pars and a bogey). Simms was another point behind after a 'ding' at the Devils Elbow followed by a bogey and a par. Foster (two pars and a double bogey) and Weir (double bogey, par, bogey) were a further point away and McKervill (bogey and two pars) was one more point down. Dinsmore ran into bogey trouble over the closing two holes to finish with a double bogey and a 'ding' but managed to hold on to WIN OVERALL RUNNER-UP. Gillan finished bogey, double bogey a point behind to win the Division a point ahead of Simms (two bogeys) and Weir (par, bogey). Weir won the Seniors and Simms finished third in the Division. Foster (two bogeys) and McKervill (two bogeys) were a point behind the placings.

At the start of the inward nine Raymond Steele (28) held an impressive four point advantage over Kevin Duffin (23) ('dings' at The Treasury and Longlands). Christopher Montgomery (21) ran into bogey trouble through three of the early holes as did John Caulfield (23) and were another two points behind. Coming to the Devils Elbow Steele still held a four point advantage over Duffin, Montgomery (ding' at The Fort') and Caulfield. Over Beechers only two points separated the four players. Steele's lead after two double bogeys was being clawed back and was reduced to one point by Montgomery (par, bogey) and Caulfield (par, bogey) with Duffin (two bogeys) another point behind. In a very close finish Steele with two bogeys and a 'ding' and Montgomery (birdie, 'ding', par) were level and with a better back nine First place was taken by Montgomery. In a close finish for the remaining place a point behind between Caulfield (bogey, double bogey, bogey) and Duffin (three bogeys) third place went to Caulfield with a better back nine.