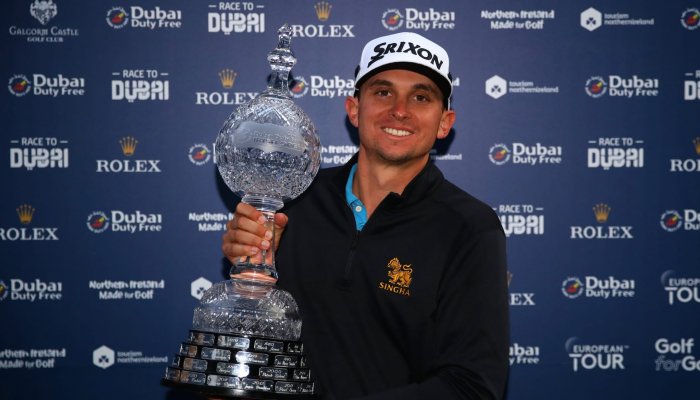 American John Catlin closed with a final round 64 at Galgorm Castle to secure the Dubai Duty Free Irish Open and his second European Tour title in a month (Photo: Getty)

Conditions were the most favourable they had been all week after a frost and fog delay at Galgorm and Catlin was the man to take advantage, birdieing three of his last four holes on a day when the 54 hole pacesetters failed to find their rhythm.

The American finished at ten under, two shots clear of overnight leader Aaron Rai and three ahead of Australian Maverick Antcliff and Thai Jazz Janewattananond. Swedish duo Joakim Lagergren and Oscar Lengden were then at six under.

Catlin is a four time winner on the Asian Tour but entered this season without full playing privileges after finishing 155th on the 2019 Race to Dubai Rankings presented by Rolex.

But after holding off two time Major Champion Martin Kaymer to win his maiden European Tour title at the Estrella Damm N.A. Andalucia Masters earlier this month, he now has a brace of European Tour wins to his name.

Catlin joins Rasmus Højgaard and Sam Horsfield as multiple winners on the 2020 Race to Dubai and moves up to 14th in the Rankings and the top 100 in the world.

He also becomes just the third American to win this event and the first for 43 years after victories for Major Champions Ben Crenshaw and Hubert Green in 1976 and 1977.

"To be listed with those names is something truly special and I’m very honoured," he said. "I’m so happy. I was talking to someone earlier about where I was at four years ago and to be here is so surreal and a testament to my coach and all the hard work we put in. It’s so awesome to just be here.

"There are so many years of hard work that have gone into this moment. It was my goal to win again at the start of this week so to accomplish that is to do something truly, truly special.

"You never know if you're going to win or not and to get that monkey off my back at Valderrama really freed me up today to know that I can look myself in the mirror and tell myself honestly that I've been here before and I can do it again.

"I've always wanted to play in the Majors, that's the only level of golf that I haven't played at and hopefully one day I can win one of those as well."

Rai surrendered his solo lead with a bogey at the first but bounced straight back with a gain on the second, a feat replicated by playing partners Antcliff and Lengden at the driveable par four.

Lengden added another birdie from 20 feet at the fourth to make it a three way tie but he fell back after finding sand on the fifth and long grass off the tee on the seventh.

He was replaced in the leading group by Janewattananond, who put his approach to six feet at the fourth and holed a 15 foot left to righter on the sixth.

Catlin was another man who had made the most of the second and he added a gain on the fourth before holing a long putt on the eighth to sit just one shot back.

The back nine is bookended by the only par fives on the course and Catlin hit the green in two on the tenth and got down in the same number to make it a four way tie.

Janewattananond made a two putt birdie of his own on the tenth to take the solo lead and while Rai also took advantage after getting up and down from a bunker, the Englishman gave the shot straight back after a poor chip on the next.

Lengden had holed a monster putt for eagle on the tenth and he was in a share of the lead at eight under when Janewattananond failed to get up and down from sand on the 12th.

All the contenders were beginning to make hard work of it, and Antcliff dropped shots on the 11th and 12th, Lengden bogeyed the 11th and Catlin dropped a shot on the 13th.

Janewattananond bucked that trend with an approach to three feet at the 13th but he made a double bogey on the next after taking a drop.  Catlin then joined Rai at the top with an 18 footer on the 15th and when he put an approach to four feet at the next to get to nine under, a Lengden bogey at the 14th looked to make it a three horse race.

A wonderful second into the par five 18th set up a two putt gain and made it three birdies in four holes to hand Catlin a two shot lead and, while Rai birdied the 17th, he found a nasty lie with his second at the last for a bogey.

Janewattananond bogeyed the 16th but picked the shot back up on the last, Antcliff also made the most of the closing hole, and Lengden birdied the 15th but bogeyed the next.  Lagergren made five birdies and a two bogeys in a 67 to finish a shot ahead of Paraguayan Fabrizio Zanotti - who carded the lowest round of the week with a 63 - England's Jordan Smith who carded a 69, and Australian Lucas Herbert who finished his week with a 70.