Rai edges ahead at Galgorm 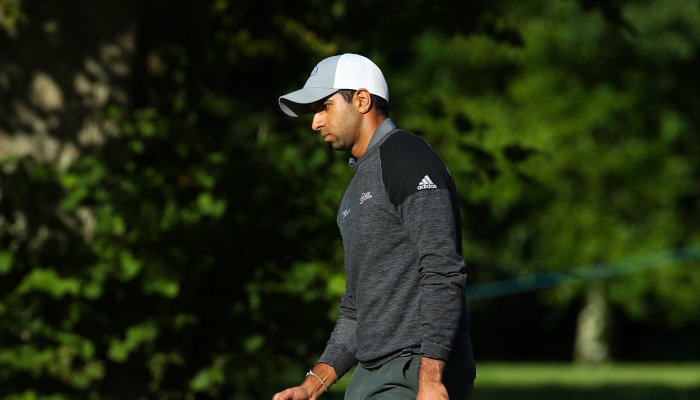 Aaron Rai stayed on course for a second European Tour victory as a 67 handed him a one shot lead heading into the final day of the 2020 Dubai Duty Free Irish Open.

The Englishman held a share of the lead after rounds one and two at Galgorm Spa & Golf Resort but managed to break free at eight under after 54 holes, one clear of Australian Maverick Antcliff.

Rai's maiden win at the 2019 Honma Hong Kong Open presented by Amundi came in wire-to-wire fashion and should he repeat the feat in Ballymena, he will be the first Englishman to lead after all four rounds of this event since Sir Nick Faldo in 1992.

"It'd be incredible," he said of potentially adding his name to a list of winners that includes Faldo and his fellow Major Winners and World Number Ones Seve Ballesteros, Bernhard Langer, Ian Woosnam and Rory McIlroy.

"Any title on the European Tour is fantastic, the Irish Open has an illustrious history, it's a huge event, it always has been. I want to put that out of my mind going into tomorrow. There’s still a lot of significance to it.

"I'll just hope to try and do the same kind of things and see where it puts us."

Of his third round, he added: "I was pleased with the round overall. The course doesn't play easy, even in easy conditions today, and it's always a little different going out in the final group and being co-leader going into day three.

"It was nice to be able to play with that and to play relatively freely and play solid today."

Antcliff had eight holes of his second round to complete in the morning and he certainly made them entertaining, making two quick birdies, following them with back to back bogeys but then putting his third to seven feet for an eagle on the last and a share of the 36 hole lead.

Burmester made it a three way tie with a birdie on the first when round three got under way but Antcliff chipped in on the same hole for the solo lead before giving the shot straight back.

A long putt had him back ahead but he soon had company again as Janewattananond holed from 12 feet on the seventh and 15 on the next to go with two opening gains.

Rai had bogeyed the first but he put an approach to six feet on the third and holed from 20 feet on the sixth, before another putt from similar range on the next handed him the solo advantage.

Janewattananond and Antcliff both took advantage of the par five tenth to make it a three way tie again, and it was Antcliff who broke clear next with a stunning tee shot to tap in range at the 14th.

A nine foot left to righter on the 15th put Rai at eight under and Antcliff dropped a shot on the next, with Janewattananond dropping shots on the 16th and 17th before birdieing the par five last.

After his opening gain, Burmester made ten pars in a row but birdied the 12th before dropping a shot on the 16th and picking it back up on the last.

Lengden had a birdie-birdie finish in his 66 to go with gains on the fourth, sixth, tenth and 13th, and bogeys on the fifth and 16th.

Herbert picked up shots on the third, tenth, 16th and last with a bogey on the sixth, while Tree made four birdies and three bogeys.