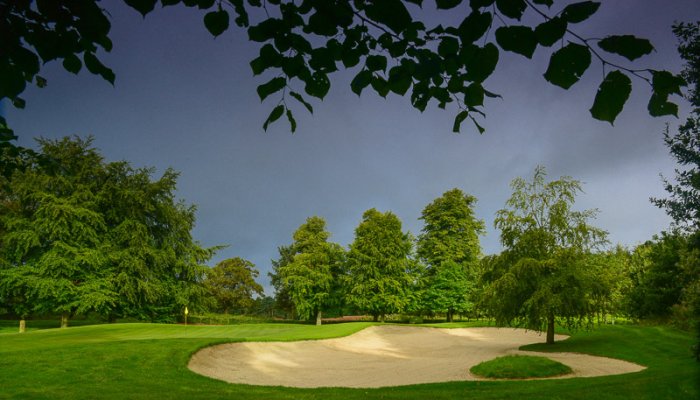 The September Medal sponsored by MET Healthcare was played for at Galgorm Castle Golf Club.

At halfway fourteen handicapper David Gault was leading by one shot from Aidan McCafferty (13) followed by Brian McFall jnr. (5) a further shot behind. Jonny McIlroy (12), Gavin McClements (13) and William Glover (14) were another one, two and three shots respectively further back. Approaching Beechers McFall jnr. held a narrow one shot advantage over Gault with McIlroy another two shots behind. Glover and McClements were a further three shots down followed by McCafferty another shot back. McFall jnr. after a birdie at Beechers and a par up the Grove was leading by three shots from Gault (par, bogey). A further four shots back came Glover (two pars), McIlroy (double bogey, par) and McClements (birdie, par). McCafferty (par, birdie) was another three shots behind. Glover finished par, bogey for a Nett 66 to Win Overall. McFall jnr. (bogey, par) and Gault (double bogey, bogey) finished together with a Nett 68 and McFall jnr. with a better back nine won the Overall Runner-up placing. Gault won Division 2. Second place went to McCafferty (bogey, birdie) with a Nett 69 and in third place with a Nett 70 came McIlroy. McClements finished with a Nett 71.

In Division 1 at the turn Sean McElroy (Scr) and Kaeden Anderson (1) were vying for the lead, two shots ahead of Kurtis McCartney (3). Keith Clements (9) was another six shots behind. Through The Maple McElroy was leading by a shot from Anderson. McCartney was a further three shots behind followed by Clements a further four shots back. Up the Grove after three pars Clements, Anderson (three pars) and McCartney (birdie and two pars) were level with a Nett 62 followed by McElroy (two pars and a bogey) close up on Nett 63. The scene was set for a close finish! Clements came in with two pars for a Nett 70 to win Division 1. Anderson (two pars), McCartney (bogey, birdie) and McElroy (par, birdie) finished together on Nett 71 and with a better back nine second place went to McCartney and in an even closer finish McElroy with a better last one claimed third place.

The Gross was won by Vincent Miskelly (1) and the Seniors by Paul Houston (7).

After the front nine in Division 3 David Stirling (15) was one shot ahead of James McKay (16) and Neil McVeigh (16). Richard Lennox (19) was another shot behind with Colin Thompson (17) a further shot back. Approaching the fourteenth tee Stirling was still one shot ahead of McKay and McVeigh who were joined by Thompson with Lennox a further two shots away. McKay, after a double bogey and two pars, joined Stirling (three bogeys) through the Grove. They were closely followed by McVeigh (double bogey, bogey, par) a shot behind. Thompson (bogey, par, triple bogey) was a further shot back with Lennox (bogey, triple bogey, par) two further shots down. McKay finished with two bogeys for a Nett 71. Thompson joined McKay after a birdie and double bogey and with a better back nine first place went to Thompson. There was another close finish for third place with Stirling (par, double bogey), McVeigh (two bogeys) and Richard Lennox (two pars) finishing together and third place went to McVeigh with a Nett 72 (better back nine)

Setting out on the homeward nine James Walker (22) was leading by a point from Samuel Bamber (20) and David Rankin (19). Garry Robinson (17) and Andrew Young (15) were a further two and four points back respectively. A new leader emerged through The Maple with Bamber leading by a point from Robinson. Walker was another point behind followed by Rankin ('ding' at The Fort) two more points back and Young a further point away. Bamber (two pars and a double bogey) was joined by Robinson (two pars and a bogey) up the Grove with Walker (bogey, par, bogey) two poiints behind. Rankin (bogey, par, triple bogey and Young (three bogeys) were a further three and four points respectively behind. Robinson came in with two bogeys to win by four points from Bamber who ran into trouble and failed to score but managed to hold on to second place. Third place went to Walker (double bogey, 'ding') another point behind. Young (double bogey, bogey) and Rankin (bogey, 'ding') were a further point away.

The above Scratch Cup was played as a Stroke Competition over two rounds with first place going to Patrick Dallat (-2) with a very good score of 143 Gross. Jamie Sutherlaqnd (-3) finished second on 146 Gross and third place went to Vincent Miskelly (1) with 147 Gross.