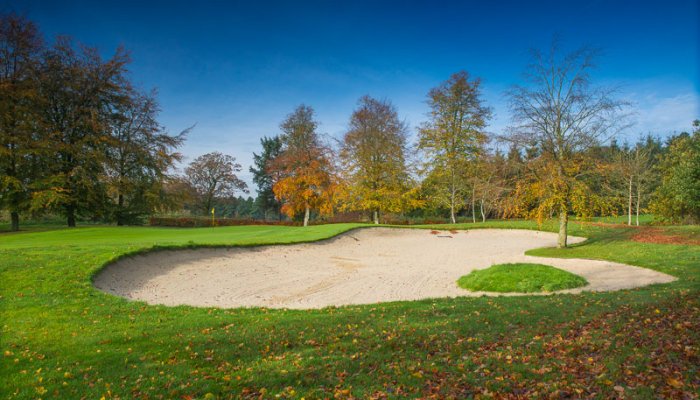 At halfway in the Rollins Insurance sponsored Stableford competition played at Galgorm Castle Golf Club Ashley Doole, playing off a handicap of twenty four, was leading by two points from Neill McCartney (10) with Stephen McAuley (3) a further two points behind. Cameron Lappin (4) and Sean McCann (4) were another point down followed by Matthew Harkness (2) three more points back.

McCartney finished par, bogey, 'ding' to Win Overall by one point from Doole (two bogeys and a 'ding') in the Overall Runner-up placing. Lappin (bogey, birdie, par) and McAuley (three pars) came in together a further three points back. Lappin with a better back nine won Division 1 with McAuley second. McCann with three pars finished a point behind in third place. Harkness (par, bogey, 'ding') was another two points behind.

In Division 2 after the front nine Brian McMath (12) held a one point advantage over Norman Reid (11). Adrian Adams (11), John McCarry (12), Peter Daly (12) and Graham Simms (13) were a further two points behind. Approaching the fourteenth tee McCarry had closed to within one point of McMath with Reid and Daly another point behind. Adams and Simms were a further point back. Reid with a birdie and a par joined McMath (bogey, par) over Beechers. McCarry ('ding', par) was two points behind followed by Simms (two bogeys) and Adams (two bogeys) and Daly (two bogeys) were a further point down. In a close finish Reid ('ding', bogey, par) and McMath (two bogeys, 'ding') finished together and with a better back nine first place went to Reid. Adams (two bogeys and a birdie) finished in third place with McCarry (two bogeys, 'ding'), Daly (two bogeys, par) and Simms (three bogeys) finishing together another point behind the placings.

In Division 3 at the turn John McClintock (18) was leading but being hard pressed for the leadership by Colin Black (14), Damien Agnew (18) and Keith Dinsmore (16) a point behind. Laurence Darragh (15) and Alastair Murray (15) were a further two and three points respectively behind. Agnew with a run of bogey and two pars was the new leader through the Grove but he was being hotly challenged by Black (bogey, par, bogey), McClintock (par, bogey, double bogey) and Murray (bogey, birdie, bogey) a point behind. Dinsmore lost ground after two bogeys and a 'ding' up the Grove and was another point behind with Darragh (two pars and a bogey) a further point down. In a close finish McClintock (two bogeys) and Black (par, bogey) were level and first place went to Black with a better back nine with John McClintock in second place. There was a very close finish for third place with Agnew ('ding', double bogey), Murray (bogey, double bogey), Dinsmore (bogey, double bogey) and Darragh (two bogeys) all finishing together two points behind. Third place went to Murray with a better back nine.

At the start of the inward nine in Division 4 Jonathan Larmour (24) and Finlay Robinson (22) were vying for the lead two points ahead of Graham Murray (22) and Gerry Lynn (21) followed by Geoffrey Martin (24) another point behind. Approaching the fourteenth tee Robinson was leading by a point from Larmour with Martin a further two points behind. Murray and Lynn were another point back. Larmour with a par, bogey, double bogey was the new leader up the Grove by a point from Robinson (two bogeys and a 'ding'). Lynn (two bogeys and a par), Martin (bogey, double bogey, bogey) and Murray (two bogeys and a double bogey) were another one, two and three points respectively further behind. Martin finished bogey, par to win by one point from Larmour (double bogey, 'ding') and Robinson (bogey, double bogey). Robinson won the Seniors and Larmour finished second in the Division. There was a tie for third place between Lynn (two double bogeys) and Murray (two bogeys) with Murray taking third place with a better back six.