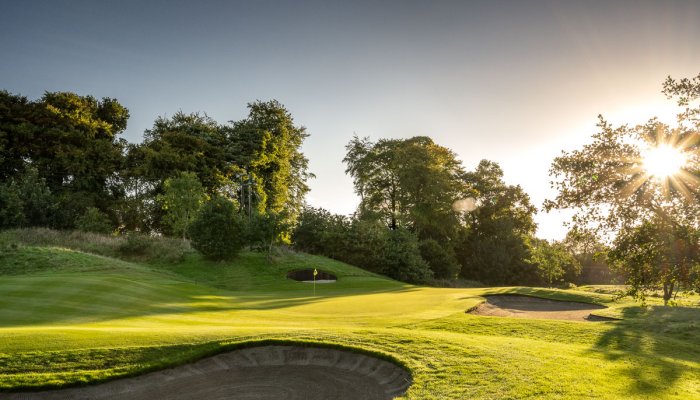 All Divisions were very competitive for the Bertie Gibson Memorial Trophy sponsored by Lamont Industrial Ltd. and played at Galgorm Castle Golf Club. There was seldom more than a point between Trevor Fletcher (15) and Lyle Foster (14) throughout the competition. At the Lowlands, the penultimate hole, Foster was still holding a one point advantage. Both players bogeyed the final hole but Fletcher with a shot advantage drew level and with a better back nine was the OVERALL WINNER with Foster the OVERALL RUNNER-UP.

At halfway Kaeden Anderson (1) was leading by a point from Adam Martin (6). Bryan Logan (7) and Jamie Sutherland (-3) were another point behind with Shane McQuillan (3) ('ding' at the opening hole) and Jordan Hood (-3) a further point down. Vincent Miskelly (1) was another point away. Approaching Beechers Martin was the new leader by a point from Anderson. Close up another point behind came Logan, McQuillan ('ding at 14) and Miskelly. Sutherland and Hood were very much in contention a further point away. Over Beechers and up the Grove Hood with two vbirdies joined Martin (par, bogey) in the lead by one point from Logan (par, bogey), McQuillan (birdie, bogey) and Miskelly (birdie, bogey). Anderson (two bogeys) and Sutherland (par, bogey) were a further one and two points respectively behind. In a close finish Martin with two pars came in to Win by one point from Hood (two pars) and Logan (two pars). Hood won the Gross and Logan finished second in the Division. Miskelly (two pars), McQuillan (two pars), Sutherland (two birdies) and Anderson (par, birdie) were another point behind and with a better back nine third place went to Miskelly.

Steven Carmichael (10) was leading by three points from Chris Cooke (12) through nine with David Bamford (10) and Billy Goodall (11) ('ding' at Spences) another point behind. Through The Maple Carmichael was leading by two points from Cooke and Bamford. Goodall was another two points behind. Carmichael after a par and two bogeys was still leading by one point from Cooke (two pars and a double bogey), Bamford (bogey, birdie, bogey) and Goodall (three pars). In a very close finish Carmichael parred the Lowlands but failed to to score at the last hole where he was joined by Cooke (par, bogey) and Bamford (par, bogey). First place went to Bamford with a better last nine. Cooke took second place with a better back nine and Carmichael came third. Goodall (two bogeys) finished a point outside the placings.

Through the front nine Lyle Foster (14) held a slender one point advantage over Trevor Fletcher (15). Owen Elliott (17) was another two points back followed by Brian Mahany (14) and Rory Drysdale (19) a further point down. Jonathan Keys (17) and Colin Thompson (16) were another one and two points respectively further back. Past the Devils Elbow and on towards Beechers Foster was proving hard to dislodge as he still held a one point advantage over Fletcher. Elliott and Drysdale were another four points behind with Keys and Mahany a further point back. Thompson was still in contention another point down. At the Grove Foster with two bogeys was still holding a one point lead from Fletcher (two bogeys). Elliott (par, bogey) was four more points back. Keys (bogey, par), Mahany (par, bogey) and Drysdale (double bogey, par) were another point behind followed by Thompson a further two points down. Foster and Fletcher finished with two bogeys each but the extra shot at the last proved decisive to give Fletcher with a better back nine the WIN OVERALL. Foster finished as the OVERALL RUNNER-UP. Elliott (two bogeys) came in three points back to WIN the Division but was being hard pressed a point behind by Keys (two bogeys), Mahany (bogey, par), Drysdale (two bogeys) and a late effort from Thompson with two pars. Second place went to Jonathan Keys with a better back nine and in third place came Mahany with a better last six. Thompson won the Seniors with a better last nine.

Entering the back nine Andrew Robinson (20) and William Crawford (32) ('ding' at the Sanctuary) were vying for the lead two points ahead of Samuel Campbell (22). Ronnie Gilchrist (20) ('ding' at Spences), Mervyn Lamont (29) and Trevor Galloway (24) (three 'dings') were a further two, three and five points respectively behind. Over Beechers Crawford was joined by new challenger Campbell with a three point advantage over Robinson ('dings' at 11 and 12). Galloway and Gilchrist were a further two points behind followed by Lamont another two points down. Crawford (triple bogey, bogey, 'ding') and Campbell (double bogey, 'ding', par) finished together with first place going to Campbell with a better back nine. Robinson (three bogeys) came third a point behind and Galloway (bogey, par, double bogey), Lamont (two bogeys and a par) and Gilchrist (bogey, par, bogey) finished together a point outside the placings.