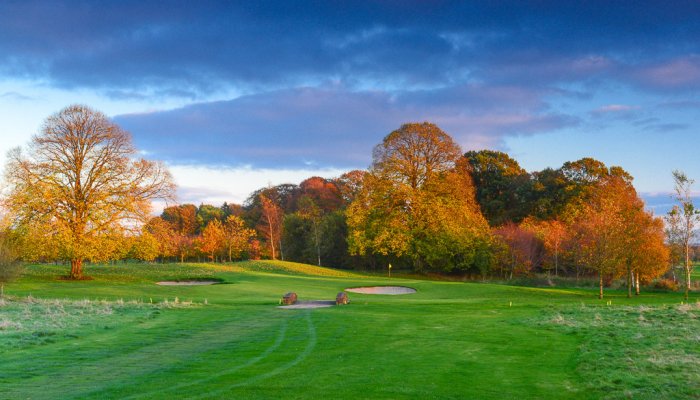 Through the Trout Hole Stephen Sexton (5), Stephen Mailey (5) and Eamon Fyfe (5) were vying for the lead a point ahead of John Robinson (-2), Keith Clements (3) and Adrian Atkinson (5). Mailey, after recording a par and a bogey, was leading approaching Broadmeadows. Robinson (par, birdie), Sexton (par, double bogey), Atkinson (bogey, par) and Fyfe (two bogeys) were close up a point behind. Clements (two pars) was another point back. The leadership changed with Atkinson (two pars) and Fyfe (birdie, bogey) leading through The Treasury with two to play. A point behind came Sexton (bogey, par) and Mailey (two bogeys) followed by Robinson (two pars) and Clements (bogey, par) another point away. In a very close finish Sexton (two pars), Mailey (two pars) and Robinson (two birdies) finished together and with a better last six first place went to Robinson, second place to Sexton with a better last three and third place to Mailey. Atkinson (double bogey, par), Fyfe (two bogeys) and Clements (birdie, bogey) finished together a point behind the placings.

Approaching Walkers Home Paul Toal (10) after opening with a bogey followed by three pars was leading by a point from Neil McVeigh (6). Two points further back came Trevor Galloway (10) and Kevin Duffin (10). Down Broadmeadows Toal (twobogeys) was joined in the lesd by McVeigh with a par followed by a bogey. Galloway (bogey, par) and Duffun (bogey, par) were still two points behind. McVeigh parred The Treasury and the Sanctuary to lead by one point from Toal (par, double bogey) and Galloway (two pars) with Duffin (par, bogey) another point behind. McVeigh finished with a par to win by two points from Duffin (par) and Galloway (bogey) who finished together. Second place went to Duffin with a better last six with Galloway third. Toal with a double bogey was a point behind the placings.

Norman Reid (5) and Rod Lennox (4)@ were leading approaching The Maple by one point from James Mairs (6). Reid, Lennox and Mairs birdied The Maple and followed with another birdie at the Devils Elbow to keep the scores as they were. Lennox and Mairs parred Beechers to lead by a point from Reid who took a bogey. The lead changed hands up the Grove with Reid (par) and Lennos (bogey) a point ahead of Mairs who dropped back after a double bogey. All three players parred the Lowlands. Norman Reid parred the final hole to win by one point from Rod Lennox (bogey). Mairs also bogeyed the final hole to finish one point behind the placings.