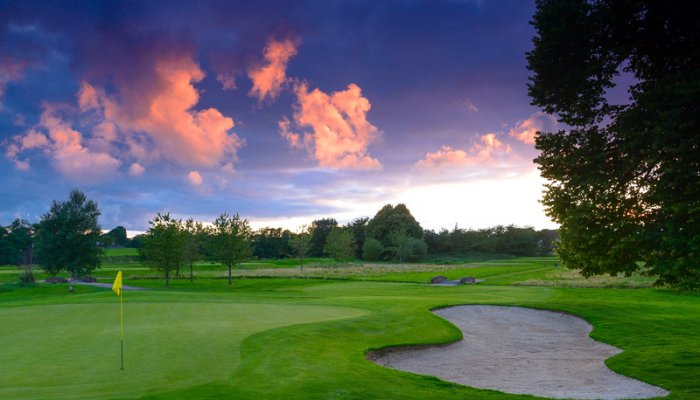 At halfway four handicapper David Stirling Jnr. was leading by two points from David McAleese (12) and John Rock (10). Thomas Dunlop (10) was another point behind followed by Chris Cooke (12) and Thomas McNeill (12) a further point back. Brian McMath (13) and Peter McMullan (11) were close up another point away. Through The Maple Stirling jnr. was still leading by two points from Rock who was joined by Cooke, McNeill and Dunlop. McAleese, McMullan and McMath were a further one, two and three points respectively behind. Up the Grove Stirling jnr. after three pars was still ahead but his lead had been reduced with Dunlop (three pars) joined by a gradually improving Cooke (bogey and two pars) only a point behind. Rock (par, bogey, par), McAleese (bogey and two pars), McNeill (bogey, paqr, bogey) and McMath (three pars) were another point behind and McMullan (par, bogey, par) was a further point back. A very close and exciting finish lay ahead. Cooke drew level with Stirling jnr. at the Lowlands and finished level after both recordrd a par at the last with the Overall Winner placing going to Cooke with a better back nine. Stirling jnr. won the Overall Runner-up place. McMath came in par, birdie a point behind to win Division 2 and in another close finish for the placings McNeill (birdie, bogey), McAleese (bogey, birdie) and McMullan (par, bogey) finished together with second place going to McMullan with a better back nine, third place to McNeill with a better back nine and McAleese fourth. A point behind the placings came Dunlop (two bogeys) and Rock (bogey, par) What a finish!

Another close finish in Division 1. At the turn Aaron Brown (2) was three points in front of Michael Reid (-3) followed by Trevor Fleming (9)' Paul Leckey (8) and Stephen Black (9) at one, two and six points respectively further back. Approaching the fourteenth tee Brown was leading by a point from an improved Fleming. Leckey was another point behind and Black and Reid were a further three points down. Over Beechers and up the Grove Fleming, after recording a par, birdie and double bogey, joined Brown (two pars and a bogey) in the lead a point ahead of Leckey (two pars and a bogey). Black (three pars) and Reid (birdie and two pars) were a further two points behind. In a very close finish only one point separated the five golfers. Fleming came home par, bogey to win by one point from Leckey (par, bogey), Brown (par, bogey), Black (par, bogey) and Reid (two birdies). Second place went to Black with a better back nine, third place to Leckey (better back nine) and fourth place to Brown. Michael Reid won the Gross.

In Division 3 after the front 9 sixteen handicapper Colin Black held a comfortable looking three point advantage over Adrian Adams (14). Ronan Laverty (18) was another two points behind followed by David Gault (14), Gordon Dillon (17) and Samuel Bamber (20) a further one, two and five points respectively behind. Approaching the fourteenth tee Black was the new leader by two points from a much improved Bamber (with the help of three pars). Adams was another point behind followed by Laverty and Dillon a further two points back. Gault was another point away. Up the Grove Black (par and two bogeys) was joined by Laverty (par, birdie, par) in the lead. Adams (par, double bogey, par) and Dillon (birdie and two bogeys) were two points behind followed by Gault (bogey and two pars) and Bamber (two pars and a bogey) another point back. Laverty came in with two pars to win by two points from Black (par, double bogey) with Dillon (bogey, par) third another point behind. There was another close finish for fourth place a further point down between Bamber (bogey, par), Adams (bogey, par) and Gault (two pars). Bamber took fourth place with a better back nine).

At the tenth tee in Division 4 Andrew Ferguson (23) was leading by one point but being hard pressed by Robert Barkley (21), Brian McFall (30) and David Rankin (25). Jordan Kirk (23) and Aaron Pattison (21) were another one and three points respectively further away. Up the Grove Ferguson was still leading by a point from an improved new challenger , Pattison. Barkley and McFall were another point behind with Rankin and Kirk ('ding' at The Fort) a further one and two points further back reesoectively. Through the Grove Pattison with a par, bogey, par was the new leader by a point from Ferguson (par, 'ding', par). Barkley (two bogeys and a par) and McFall (par, bogey, triple bogey) were a further point behind followed by Rankin (two bogeys and a double bogey) and Kirk (two double bogeys and a par) at another two and four point intervals back. Ferguson (triple bogey, par) and Barkley (@bogey, par) finished together and with a better back nine first place went to Robert Barkley with Ferguson second. One point behind came Pattison (two double bogeys) and McFall (double bogey, bogey) and with a better back nine third place went to pattison. Rankin (double bogey, bogey) and Kirk (bogey, par) finished together another two points back.