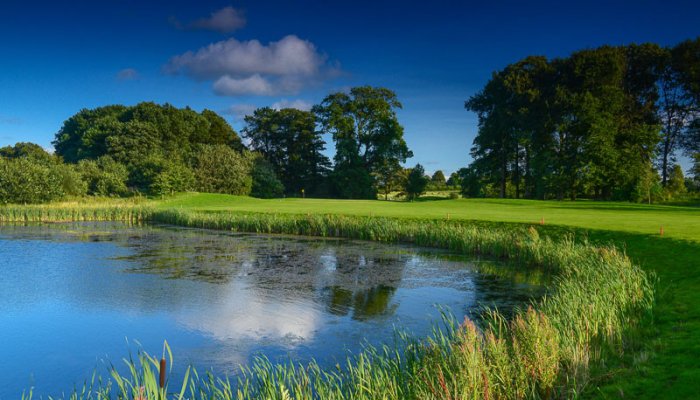 Four handicapper Matthew Reid won the Bob & Bert's sponsored Monthly Medal played at Galgorm Castle Golf Club under cloudy skies and with the course in good condition. Reid won with a Nett 66 but was hard pressed by James Donaghy (Scr) and Seamus Laverty (19), both finishing with a Nett 67.

Paul Wilson (8). Gary Henry (7) was another four shots behind with Paul Banks (5) and Mark Hamilton (9) a further one and four shots further back. Through The Maple Donaghy had increased his lead to three shots over Reid. Wilson was another shot behind followed by Henry a further four shots down. Banks was another shot behind with Hamilton a further three shots away. Donaghy finished with two pars and a birdie for a Nett 67 but was overtaken by Reid with three pars for a Nett 66. Reid was the Overall Winner with Donaghy in the Overall Runner-up placing. Wilson came in par, bogey, birdie for a Net 69 to Win Division 1. Banks finished with a par, birdie, par (Nett 70) in second place. Third place went to Hamilton (two pars and a birdie) with a Nett 71 (better back nine) and Henry (double bogey, bogey, par) Nett 72 took fourth place.

In Division 2 after the front nine Stephen Carmichael (10) was leading by two shots from George Small (10) and Bryan Logan (11). Chris Moore (13), Caolan McCambridge (11) and David Martin (12) were another one, two and four shots respectively further behind. Through Beechers Carmichael was still leading by one shot from new challenger Logan who was another shot ahead of Small. Moore and McCambridge were a further two shots down followed by Martin another shot away. Carmichael increased his lead over the closing three holes and finished with two bogeys and a birdie for a Nett 69 to take Division 2. There was an exciting finish for the placings between Logan (double bogey, triple bogey, par), Small (triple bogey and two pars), Moore (par, bogey, triple bogey), McCambridge (par and two bogeys and Martin (par and two bogeys) who all finished with a Nett 73. Second place went to Martin with a better back nine. McCambridge took third place with a better back nine and fourth place went to Small with a better back six.

In Division 3 entering the back nine Seamus Laverty (19) held a one shot lead from David Gault (15). David McIlroy (15) was another three shots behind. Gavin McClements (17), Aaron Pattison (21) and John Montgomery (23) were at one, two and four shots respectively further back. Approaching Beechers after two bogeys and a par Laverty had increased his lead to five shots over Gault and McIlroy. McClements was a further two shots back with Pattison another two shots away. Montgomery was down by four more shots. Laverty continued to lead and finished with two bogeys and a triple bogey for a Nett 67 (a last hole triple bogey which may well have cost him overall victory) to win Division 3. Gault (par, double bogey, par) took second place (Nett 70) with McIlroy (two pars and a double bogey), McClements (par and two bogeys), Pattison (two double bogeys and a par) and Montgomery (three bogeys) finishing together on Nett 72. With a better back nine third place was taken by McIlroy and McClements finished fourth with a better back six.

Bob and Bert's were the sponsors of the Subsidiary white Stableford competition. After the front nine in the above competition Ronnie Gilchrist (19) was holding a slender one point advantage over Timothy McNeill (25), Kevin Agnew (29) and Kenneth Gregg (20). Walter Lewis (23) and Ronan Speers (30) were another two points behind. At Beechers a new leader had emerged. Speers ('ding' at twelve) was two points ahead of McNeill and Gregg. Another point back came Lewis followed by Agnew and Gilchrist at two and four points respectively further down. With two to play McNeill after a par and a bogey and Agnew (bogey, birdie) were the new leaders by a point from Lewis (two pars) and Speers ('ding', bogey). Gregg (double bogey, bogey) was a further two points back followed by Gilchrist (two pars) another point behind.. M:cNeill continued to lead and finished with two pars to Win by three points from Lewis (birdie, 'ding'). Speers (two double bogeys) came third and in a close finish for fourth place between Gilchrist (bogey, par), Agnew ('ding', double bogey) and Gregg (par, double bogey) Gilchrist took fourth place with a better back nine.

The above competition was won by Tom Wiggins (26) with 39 pts.