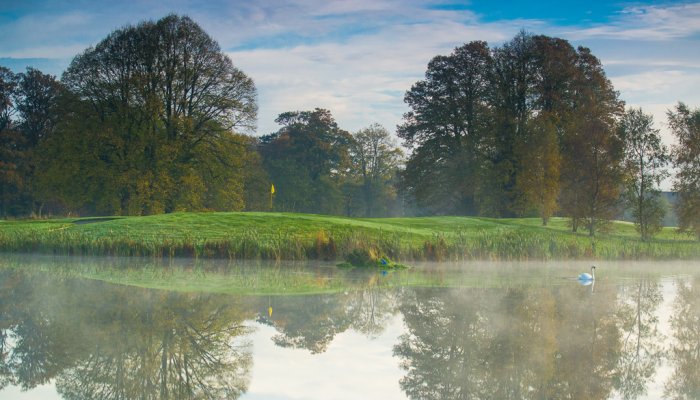 Ace Fixings sponsored the Bertie Gibson Trophy played at Galgorm Castle Golf Club. The course was in excellent condition thanks to ground staff.

In Division 4 at halfway Christopher Byles, playing off a handicap of twenty one was leading by five points from Maurice McDowell (27). Eamonn Elliott (29) and Andrew Nicholl (22) were a further point behind with Gordon Dillon (22) and Ryan Higgins (19) another pointdown, Malachy Graham (27) and Kevin Duffin (22) were a further two and three points respectively behind. Through The Maple Byles held a four point advantage over McDowell. Elliott, Dillon and Nicholl were three points further back followed by Higgins another point away. Graham and Duffin were a further two points back. Up the Grove McDowell had closed to within two points of Byles with Elliott another two points away. Dillon and Higgins were a further three points down. Duffin, Graham and Nicholl were another point back. Byles finished bogey, par to Win Overall by two points from McDowell (bogey, double bogey) in Overall Second Place. Two points behind, Elliott, with a bogey, double bogey finish won Division 4 by one point from a closing Dillon (two pars). Two points further behind, Duffin (birdie, bogey), Graham (two bogeys), Higgins (two bogeys) and Nicholl (bogey, par) finished together with third place going to Duffin with a better back nine. Graham took fourth place with a better back nine.

After the front nine in Division 1 Michael Alexander (7) was leading by two points from Tony Carroll (8) followed by Mark Dunlop (4) and Cameron Lappin (9) a further one and two points respectively behind. Approaching The Maple Lappin with the help of two birdies had closed to within one point of Alexander. Carroll and Dunlop were another point behind. Over Beechers Dunlop, after a birdie, par and another birdie joined Alexander (bogey, par, bogey) in the lead, a point ahead of Carroll (bogey, par, par) and Lappin (two pars and a 'ding' at Beechers). In the closing three holes Alexander with three pars came in to win by one point from Carroll (bogey, birdie, par). Dunlop (par, bogey, birdie) and Lappin (bogey and two pars) finished together another point behind and third place went to Lappin with a better back nine and Dunlop finished fourth.

At the turn in Division 2 James Taylor (10) and Mervyn Foster (12) were vying for the lead but also were being hard pressed by David Halliday (10) and Adrian Atkinson (12) a point behind. Two points further back came Jonarhan Forgrave (13) and James Mairs (13). After The Maple Taylor and Atkinson were a point ahead of Halliday and Foster ('ding' at twelve). Mairs was a further three points back followed by Forgrave another two points down. Approaching Longlands and with two holes to play Atkinson and Halliday both lost ground with a 'ding' at Beechers. Taylor was leading by two points from Atkinson and Foster with Halliday, Forgrave and Mairs another two points down. Taylor came home with two bogeys to win by two points from Atkinson (double bogey, par), Foster (two bogeys) and Halliday (two pars). Second place went to Halliday with a better back six and Atkinson took third place with a better back nine. Fourth place went to Foster. Forgrave (par, bogey) and Mairs (bogey, par) finished together a point outside the placings.

In Division 3 after the outward half Colin Thompson (18) held a slender one point advantage from James McClintock (17) and David Gault (15). Nicholas Kernohan (18) was another point behind with Clifford Irvine (18) and John McFarland (18) a further point down. Approaching the fourteenth tee McFarland, after a run of three pars and a bogey, was vying for the lead with Thompson ('ding' at The Maple). Kernohan, McClintock ('ding' at eleven) and Gault ('ding' at eleven) were another one,two and three points respectively further behind with Irvine two more points back. Through the Grove McClintock and Thompson were joint leaders, a point ahead of Gault, Kernohan and McFarland. Irvine was another four points behind. What an exciting finish lay ahead! James McClintock came in birdie, double bogey and was joined by Gault (par, bogey a point ahead of Thompson (double bogey, bogey). First place went to McClintock with a better back six with Gault second and Thompson in third place. Two further points behind , Kernohan (two double bogeys), McFarland ('ding', bogey) and Irvine (two pars) finished together with fourth place going to Irvine with a better back six.

The above competition was won by Andy McWilliams (41) by one point.