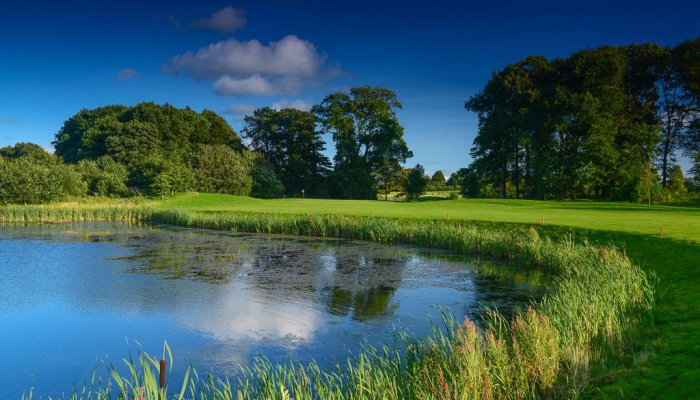 The Castle Trophy sponsored by Stephens Catering Equipment was played at Galgorm Castle Golf Club. The eventual Overall Winner was David Gracey playing off twenty six with Mervyn Foster (12) pushing him all the way a point behind to take the Overall Runner-Up placing. Both players failed to score at the eighteenth hole.

In Division 4 at the turn David Gracey (26) and Kenneth Gregg (21) were vying for the lead two points ahead of Norman McKernan (29). Timothy McNeill (27) and William Crawford (30) were another point behind followed by Conor Murray (31) a further two points back. Approaching the fourteenth tee Gracey was two points ahead of Gregg with Crawford and McKernan another point behind. McNeill and Murray were a further two points back. Up the Grove and with two to play Graceyhad increased his lead to five points over Gregg who was joined by Crawford and an improving McNeill. Two further points away came McKernan and Murray. Gracey finished bogey, 'ding' to Win Overall. McNeill (triple bogey, par), Crawford (bogey, double bogey) and an improving Murray (par, bogey) finoshed four points behind Gracey and with a better back nine Murray won Division 4. Second place went to McNeill with a better back nine and third place was taken by Crawford. A point further behind came Gregg (double bogey, bogey) and McKernan (two bogeys) with fourth place going to McKernan with a better back nine.

At halfway in Division 2 Mervyn Foster playing off a handicap of twelve held a two point advantage over Rod Lennox (10). Close up behind, another point away, came a quartet of players - Norman Nicholl (10), Ross McCallum (13), Ricki Simpson (10) and Stephen Sexton (11). Paul Hughes (11) was a further two points down. Through The Maple Foster was one and two points respectively ahead of new challenger Nicholl and Lennox. A further point back came McCallum and Simpson followed by Sexton and Hughes another point behind. Foster with a run of birdie, par, birdie had increased his lead to four points over Nicholl (two pars and a bogey) and McCallum (par, bogey, par). Lennox was another point behind with Simpson and Sexton a further point back. Hughes was two further points down. Foster finished bogey, 'ding' to Win Runner-Up Overall. Three points behind Nicholl came in par, 'ding' to win Division 2 by a point from McCallum (bogey, 'ding') and Rod Lennox (par, 'ding'). Second place went to McCallum with a better back nine with Lennox third. Another point behind came Simpson (par, 'ding'), Sexton (double bogey, par) and Hughes (two pars). Fourth place was taken by Hughes with a better back nine.

In Division 1 after the front nine Cameron Lappin (8) held a slender one point lead over Sean McElroy (1) and Jordan Hood (-3). Another point behind came Alan Moore (18) and Michael Reid (-2). Robbie Sutherland (4) was another point down. Approaching The Maple Lappin was in the lead by a point from Moore. McElroy and Hood were another point behind followed by Reid and Sutherland a further point back. Over Beechers the pressure was really on with Lappin (three bogeys), Moore (bogey, par, bogey), Hood (birdie, par, birdie) McElroy (bogey, birdie, par) and Robbie Sutherland (bogey, par, birdie) all vying for the lead a point ahead of Reid (par and two birdies). A close and exciting finish was envisaged over the closing three holes. Lappin (par, bogey, par) and McElroy (two pars and a birdie) finished together and Division 1 went to McElroy with a better back nine. A point behind came Moore (two bogeys and a par) and Hood (bogey, birdie par). Hood won the Gross and Moore took third place. Another point behind came Sutherland (bogey and two pars) and Michael Reid (three pars) with Sutherland taking fourth place with a better back nine.

The above competition was won by Fergus McKelvey (22).