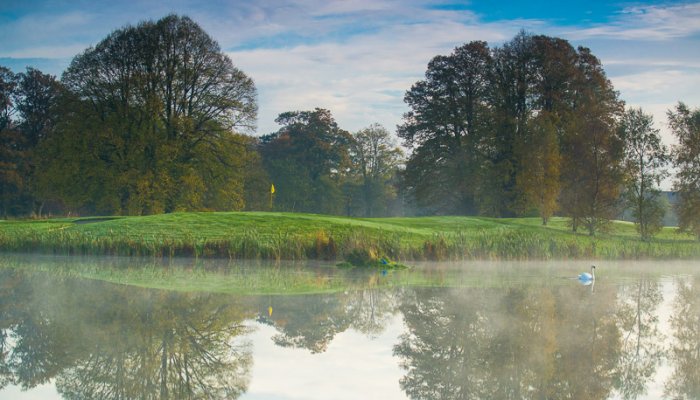 At halfway in the Robinson's NISA Extra sponsored Robinson Trophy played at Galgorm Castle Golf Club three handicapper Stephen McAuley was leading in Division 1 but being hard pressed by Cameron Lappin (7), Michael Alexander (7) and Paul Wilson (4) for the lead a point behind. Michael Reid (-2) and Paul Leckey (8) were another point behind followed by Mark Dunlop (3) and Tony Douglass (7) one and two points respectively further back. Approaching Beechers McAuley was still leading by a point from Wilson. Reid, Lappin and Dunlop were a further point behind with Alexander and Leckey another point back. Douglass was another four points away. Up the Grove McAuley, after two birdies, had increased his lead to three points from Lappin (two pars). Reid (two pars), Wilson (par, bogey) and Leckey (birdie, bogey) were another point away. Dunlop (par, bogey) was a further point behind and Alexander (par, double bogey) and Douglass (birdie, par) were another point down. McAuley continued to lead and came home birdie, par to Win Overall by three points from Reid (par, eagle) and Lappin (two pars) with the Overall Runner-up placing going to Reid with a better back nine. Lappin won Division 1 by three points and there was a very close finish for the placings between five players – Leckey (bogey, par), Wilson (bogey, par), Dunlop (two pars), Douglass (two pars) and Alexander (two pars). Second place went to Douglass with a better back nine and Dunlop took third place with a better back nine and Leckey was fourth with a better back nine.

What a finish to Division 2 with three players returning the same score! At the turn Kevin McCavera (10) and Alan Proctor (12) were vying for the lead a point ahead of James Taylor (10) and Keith Barkley (12). Paul Reid (11) and Paul Hughes (11) were another four points away. Through The Maple McCavera was leading by a point from Proctor. Taylor and Barkley were another two points behind followed by Hughes and Reid a further two and four points respectively behind. Over Beechers McCavera after two bogeys was joined by Proctor (par, double bogey), Taylor (bogey, birdie) and Barkley (par, bogey) followed closely by Hughes (two pars) a point behind. Reid (bogey, par) was another three points behind. In a very, very close finish McCavera (bogey, par, par), Barkley (two pars and a bogey) and Taylor (birdie, double bogey, par) came in together and first place went to Taylor with a better last one. Barkley came second with a better back nine with McCavera in third place. Proctor (two pars and a double bogey)finished a point behind the placings followed by Reid (birdie, par, bogey) and Hughes (double bogey, bogey, par) a further two points back.

In Division 3 after the front nine Derek O'Kane (15) and Chris Cooke (14) were leading by a point from Gavin McClements (17) and Ryan Wiggins (18). Caolan McCambridge (14) was another four points behind at this stage. Approaching the fourteenth tee Cooke was leading by two points from O'Kane, Wiggins and McClements with McCambridge a further four points back. After the Grove O'Kane after three bogeys was leading by a point from Cooke who ran into trouble at Beechers and the Grove and Wiggins (double bogey and two bogeys). McClements who also ranh into trouble and McCambridge (bogey, par, bogey) were another two points behind. O'Kane finished par, double bogey to win by a point from McCambridge (birdie, par). Wiggins (double bogey, bogey), Cooke (two bogeys) and McClements (par, bogey) finished a further point back. McClements claimed third place with a better last three and with a better back nine fourth place went to Wiggins.

There was another close finish in Division 4. Kenneth Gregg (21) was leading by a comfortable looking four points from Leonard Campbell (20), Seamus Laverty (19), Walter Lewis (24) and Harkness McCaughan (21) starting the back nine. On reaching the fourteenth tee Gregg, after a 'ding' at twelve, continued to lead with McCaughan closing to within one point. Campbell and Lewis ('ding' at Beechers) were a further two points behind with Lavertyh another point back. Approaching the Lowlands Gregg after a par, double bogey, bogey was joined in the lead by McCaughan (bogey, par, bogey). Two points behind came Campbell (two bogeys and a par) with Laverty (two pars and a double bogey) and Lewis (bogey, 'ding', bogey) another one and three points respectively further down. In a nail biting finish Gregg (bogey, double bogey) and McCaughan (bogey, double bogey) and were joined by Campbell (par, bogey) in a threeway tie. First place went to Campbell with a better back nine. McCaughan won the Seniors and Gregg took second place behind Campbell. A point behind came Laverty (par, bogey) and Lewis (two pars) with Laverty taking third place with a better back six.

The Green Competition was won by Tom Wiggins (27) with 40 pts.