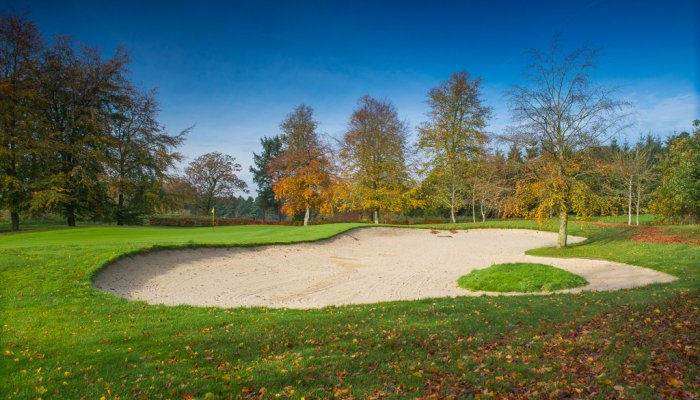 Four golfers were vying for the lead through the Trout Hole – Michael Catterson playing off 6, Neil Fitzsimmons (5), Stephen Mailey (5) and John McCarry (5) were all level.

Through The Niuc Raymond Steele (12) had a two shot advantage over Jordan Savage (9) and Fergus McKelvey (10). Aidan Donnelly (10) ('ding' at the Trout Hole)was another two points behind. After The Treasury Steele was still leading by one point after recording two bogeys and a double bogey but was being hard pressed by Savage (double bogey and two pars) and McKelvey (par, double bogey, par). Donnelly (two bogeys and a birdie) was another point behind. Steele finished bogey, double bogey and was overtaken by Savage with a bogey, par finish to win by one point from Steele, McKelvey (two bogeys) and Donnelly (par, bogey). Second place went to Donnelly with a better last six.

Approaching the fourteenth tee Steven Carmichael (5) held a slender one point advantage over Alastair Murray (6), Paul Reid (6) and Paul Steenson (6). Adrian Atkinson (6) ('ding' at Arthurs Seat) was another point behind followed by Andrew Lane (2) a further point back. Over Beechers, Carmichael after two pars was joined in the lead by Murray with two pars, one point ahead of Atkinson (two pars) and Steenson (bogey, par). Another point behind came Lane (par, birdie) and Reid (par, double bogey). In a close finish over the three remaining holes Carmichael parred the Grove, bogeyed the Lowlands and birdied the closing hole. He was joined by Atkinson who completed his round with two pars and a birdie. First place went to Atkinson with a better last six. Murray (two pars and a bogey) finished in third place a point behind. Lane (birdie, par, birdie) , Reid (three pars) and Steenson (par, birdie, double bogey) finished together a point behind the placings.

Through The Maple Daniel McIlroy (11) was leading by two points from Richard Lennox (9), Malachy Kyne (10) and Rory Drysdale (9). McIlroy continued to lead after a bogey at Devils Elbow followed by another bogey at Beechers and a par up the Grove. However Lennox (par, bogey, par), Kyne (par, bogey, par) and Drysdale (two pars and a bogey) had reduced McIlroy's lead to one point with two left to play. Richard Lennox finhished bogey, par to win by one point from McIlroy (bogey, double bogey), Kyne (par, double bogey) and Drysdale (par, double bogey). Second place went to Kyne with a better last three and in third place came Drysdale with a better last six.