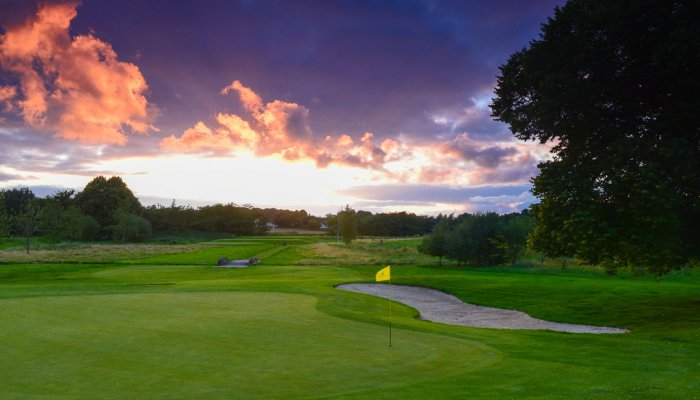 Through The Niuc Paul Reid playing off a reduced handicap of 5 was leading but being hard pressed by Chris Cooke (5) and David Stirling jnr. (-1) a point behind. George Small (4) was another point behind after failing to score at the Trout Hole. James McClintock (5) ('ding' at the Trout Hole) and David McAleese (4) ('ding' at the opening hole) were a further two points behind. Reid continued to lead by two points down Broadmeadows, after a bogey and a par, from Small (bogey, par) and Stirling jnr. (bogey, birdie). Another point behind came Cooke (par, 'ding') and McAleese (two pars) with McClintock (par, bogey) another point down. Reid was proving difficult to catch and approaching Longlands after recording a par followed by a bogey had increased his lead further to three points over Stirling jnr. (two pars). Small (par, 'ding'), McAleese (two bogeys), Cooke (two bogeys) and McClintock (par, bogey) were another point behind. Longlands promised an exciting finish. Reid with a bogey held on to win by two points from Stirling jnr. (par), Cooke (birdie, McAleese (par) and McClintock birdie) who all finished together. Second place went to James McClintock with a better last six.

Approaching Walkers Home William Kennedy (10) was leading by a point from Gerard Lynn (9), Seamus Laverty (6) and Tony Quinn (9) followed by Roy McDowell (12) ('ding' at the Niuc) another point behiond. Down Broadmeadows and through The Treasury a new leader emerged. Lynn with a run of par, bogey, par was leading by a point from Kennedy (par, double bogey, bogey) and McDowell (birdie, bogey, double bogey). Laverty (two bogeys and a par) and Quinn (three bogeys) were another point behind with two holes to play. In another close finish Lynn double bogeyed the Sanctuary and parred Longlands to win by one point from Kennedy (two bogeys), McDowell (two bogeys), Laverty (bogey, par) and Quinn (bogey, par) who finished together. Laverty finished in second place with a better last six.

Through The Maple David McIlroy (7) and Gary Crabbe (7) were vying for the lead but were under pressure from Michael McAuley (7) ('ding' at Arthurs Seat) and Colin Black (7) a point behind.. Darryl Robinson (7) and Paul Hughes (6) were another point back. Over Beechers McIlroy with a bogey and a par and Crabbe (par, bogey) were still in front by a point from Robinson (two pars) and Black (par, bogey). McAuley (two bogeys) and Hughes (bogey, par) were a further one and two points respectively behind. McIlroy bogeyed the Grove and the Lowlands and Crabbe also with two bogeys were joined in the lead by McAuley with two pars and Robinson (par, bogey). Black (two bogeys) and an improving Hughes with two pars were one point behind with only the closing hole left. In another close finish Robinson and McAuley parred the last to finish together and with a better last six first place went to Robinson. A point behind the placings came Hughes (par), Black (par), McIlroy (bogey) and Crabbe (bogey).

There was another entertaining finish to this Divisio. Approaching The Maple Patrick Reid, after opening with two pars and a bogey, was leading by a point from Colin Thompson (8). Kevin Agnew (13) ('ding' at Arthurs Seat) was another point behind followed by Ciaran Doherty (8) a further point down. At Beechers Reid, after two bogeys, was joined by Thompson (bogey, par). Agnew (par, double bogey) was a point behind with Doherty (double bogey, par) a further two points back. Reid and Thompson both parred Beechers and the Grove to lead by two points from Agnew (two bogeys) and an improved Doherty (birdie, par). In a very close and exciting finish all four players finished together. Reid double bogeyed the Lowlands and bogeyed the last; Thompson bogeyed the Lowlands and double bogeyed the last; Agnew came in with a double bogey and a par and Doherty finished bogey, par. First place went to Doherty with a better last six and Agnew finished in second place with a better last six. Joel McNeill (Scr) won the Back 9 Gross with 16 gr/pts. Twos were recorded by – S.McAuley; S.McElroy; Peter Houston; R.McDowell; I.Stewart; A.Murray and C.Doherty.