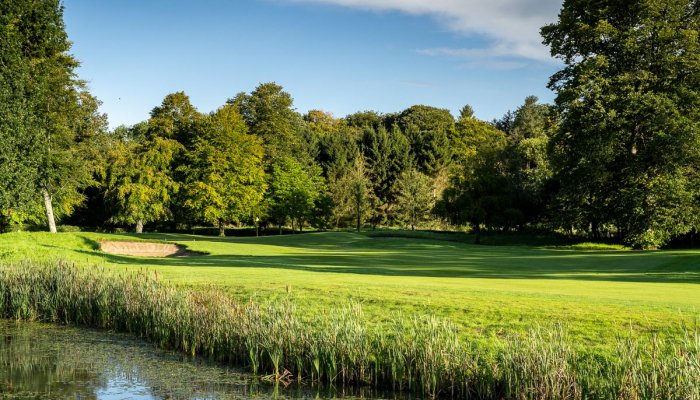 The McCarroll/McConnell sponsored Stableford competition played at Galgorm Castle Golf Club had several close and exciting finishes to some Divisions. John McCarry (10) was the Overall Winner, victory coming at the last hole, with Robbie Sutherland (5) the Overall Runner-up.

At halfway Robbie Sutherland (5) held a slender one point advantage over John McCarry (10). Sutherland bogeyed The Fort and followed with three pars to increase his lead to three points at The Maple. He then followed with a bogey, par, bogey and McCarry with a par, bogey, par closed to within two points of Sutherland. Down Lowlands McCarry drew level with Sutherland with a birdie to a par and a three pointer at the last saw McCarry home to WIN OVERALL by a point from Sutherland in the OVERALL RUNNER-UP placing.

Two points separated the first five golfers at the turn with Tony Douglass (9) leading by a point from John Rainey (9). David Bamford (7), George Small (9) and Jordan Hood (-3) were another point behind. Through The Maple Douglass lost the leadership after 'dings' at The Fort and Arthurs Seat. Small was the new leader but being hard pressed by Bamford and Rainey a point behind. Hood was another point down with Douglass a further two points away. Up the Grove Bamford after three pars was leading by a point from Rainey (two pars and a bogey). Small (three bogeys) and Hood (three pars) were another point behind with Douglass (two pars and a bogey) a further two points back. In a close finish Bamford (two pars) and Rainey (two pars) finished together with first place going to Bamford with a better back nine. Two points behind, Small (double bogey, birdie), Douglass (par, birdie) and Hood (par, birdie) were level. With a better back nine third place went to Small and Hood won the Gross with 41 gr/pts.

At halfway Neil McVeigh (12) and Gary Wilkins (12) were vying for the lead five points clear of Brian McMath (11) (opened with a .'ding'), Paul Steenson (11) ('dings' at second and third holes) and Peter Moore (10). Stephen Mailey (13) ('ding' at Broadmeadows) was another two points back. Coming to Beechers Wilkins was the new leader by three points from McVeigh ('ding' at Devils Elbow) and Moore. McMath and Mailey were another two points behind with Steenson close up a further point down. Wilkins bogeyed Beechers and followed with a double bogey and a par to hold onto a diminshing lead by two points from McVeigh (par and two bogeys). McMath (par and two bogeys) and Mailey (two pars and a bogey) were another point behind with Steenson a further point back. An exciting finish lay ahead with only one hole left to play. Wilkins double bogeyed and McVeigh with a birdie came in to win by one point from Wilkins. McMatm finished with a par to take third place. A point behind the placings came Steenson (par), Moore (bogey) and Mailey (bogey) who won the Seniors with a better back nine.

After the Front 9 Seamus Laverty (17) was three points ahead of Samuel Bamber 16) ('ding' at Broadmeadows) with Keith Barkley (15) and John Caulfrield (20) ('ding' at Broadmeadows). Through The Maple Laverty was still leading with Bamber two points behind. Caulfield was another two points behind with Barkley a further two points down. An improved Caulfield parred the Devils Elbow, Beechers and the Grove to draw level with Laverty (bogey, double bogey, bogey). Bamber ('ding' at the Devils Elbow followed by a birdie and a double bogey was two points behind. Barkley (par, bogey, par) was another point away. In another close finish Laverty came in with two bogeys and was joined by an improving Barkley with a birdie and a par. With a better back nine first place went to Barkley with Laverty second. In third place came Caulfield (paqr, 'ding') a point behind. Bamber (par, 'ding') was another two points back.

Reaching the Back 9 Geoffrey Martin (26) held a two point advantage Andrew Nicholl (23) ('ding' at Longlands). Jordan Savage (22) and David McNeill (23) ('ding'/ at The Niuc) were a further one and four points respectively behind. At the Devils Elbow Nicholl was the new leader four points clear Savage. Martin fell back after 'dings' at The Fort and Arthurs Seat and was joined by McNeill another point behind. Up the Grove Nicholl after two bogeys and a double bogey was four points ahead of Martin (par, double bogey, bogey). Savage (two bogeys and a double bogey) was another point behind followed by McNeill (par, 'ding', double bogey) a further point back. Nicholl with two double bogeys and Martin (par, bogey) came in together two points clear of Savage (par, bogey) and McNeill (two bogeys). First place went to Nicholl with a better back nine with Martin in second place. McNeill with a better back nine came third.