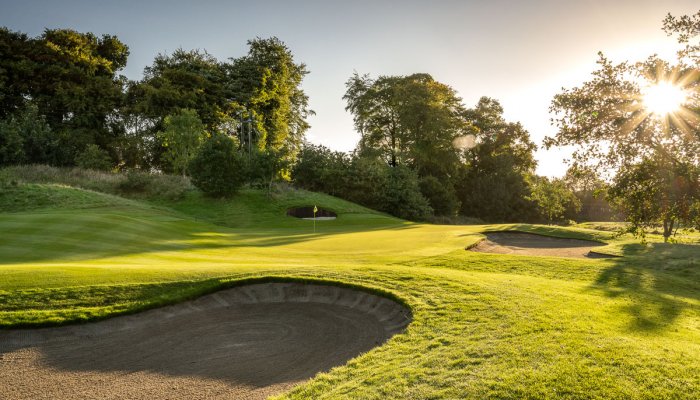 At halfway in the Monthly Medal/Brooke Trophy sponsored by Dallat Group and Subsidiary Stableford played at Galgorm Castle Golf Club. Stephen McAuley (2) was leading by four shots from James Taylor (9) and Kurtis McCartney (2). Gary Henry (7) and William Rice (9) were another two shots behind. Through The Maple McAuley was still holding his four shot advantage over McCartney. Henry was another shot behind. A further one and three shots behind came Taylor and Rice respectively. McCartney after recording a par, birdie, par had closed to within two shots of McAuley (two pars and a bogey) up the Grove. Henry (two pars and a bogey) was another three shots behind and Taylor (bogey, par, bogey) a further two shots down. Rice (birdie, bogey, triple bogey) was a further three shots down. In a close and exciting finish McAuley and Henry returned two pars each for a 70 Nett. First place went to Henry with a better back nine. A double bogey and a par finish gave Taylor a 71 Nett for third place. McCartney (par, bogey) and Rice (two pars) came in with a 72 Nett just behind the placings.

Through the Front 9 Peter McMullan (10) held a shot advantage over Andrew Moore (13) with Gary Wilkins (13) and Andrew Lowry (19) another shot behind. Approaching the Devils Elbow McMullan was two shots ahead of Lowry. Moore was another shot behind with Wilkins a further two shots back. At the Lowlands Lowry (two pars and a bogey) was the new leader by a shot from McMullan (three bogeys). Moore (par and two bogeys) and Wilkins (two pars and a bogey) were another shot down. In another close finish Moore with a double bogey and a par and Wilkins with a bogey and a par finished with a 69 Nett with Wilkins taking first place with a better back nine. Lowry (bogey, par) and McMullan (triple bogey, birdie) came in with a 70 Nett. Third place went to Lowry with a better back nine.

Entering the Back 9 Stephen Mailey (14) was one shot ahead of Damien Agnew (18). James Kennedy O'Shea (18) was another shot behind. John Caulfield (21), Philip Galloway (15) and Harkness McCaughan (25) were a further two, four and eight shots respectively back. Coming to Beechers Mailey was leading by two shots from O'Shea. Galloway was another shot behind with Caulfield and Agnew a further shot down. McCaughan was another seven shots back. Mailey with a bogey and a double bogey continued to lead. a shot ahead of O'Shea (double bogey, par). Galloway (par, triple bogey), Agnew (triple bogey, par), Caulfield (two double bogeys) and McCaughan (par, bogey) were two, three, four and eight shots further back respectively. In a tight finish O'Shea with a double bogey and a par came in to WINOVERALL with a 66 Nett. Caulfield (two bogeys) finished OVERALL RUNNER-UP with a 67 Nett. McCaughan (double bogey, bogey) and Mailey (bogey, par) finished together with a 68 Nett. First place in the Division went to McCaughan with a better back nine. There was also a tie for third place between Galloway (two bogeys) and Agnew (bogey, triple bogey) with a 71 Nett. Galloway took Third place with a better back nine.

At the turn Andrew Ferguson (20) was five points clear of Conor (Murray (29), Kevin Devlin (23) and Ian Manson (24). At The Maple Ferguson was still in the lead by four points from Murray, Devlin and Manson. Ferguson parred the Devils Elbow but a 'ding' at Beechers enabled Murray (two bogeys) and Manson (bogey, par) to close to within two points of the leader. Devlin (two bogeys) was another point behind. Ferguson bogeyed the Grove and the Lowlands and finished with a par to win by two points from Murray (bogey and two double bogeys) in second place. Manson (two bogeys and a double bogey) and Devlin (double bogey, birdie, double bogey) finished together with third place going to Devlin with a better last six.