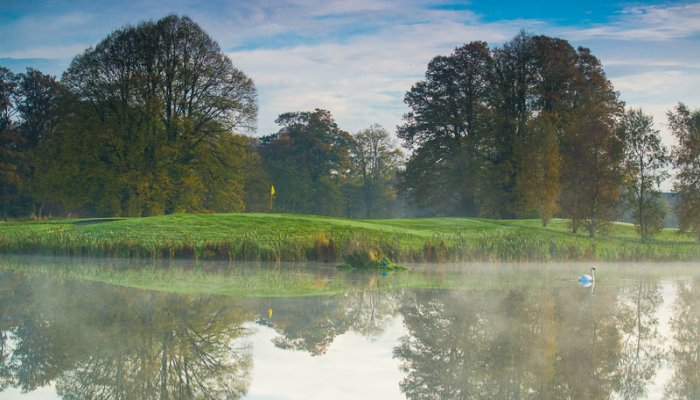 At the halfway point Ronan Laverty (17), Jordan Hood (-3), Jordan Millar (4) and Jonathan Rodgers (3) were vying for the lead a point ahead of Paul Reid (12). Bryan Logan (10) was another point behind. Through The Maple and after birdies at eleven and thirteen Millar had opened up a lead of three points from Hood and Rodgers. Laverty ('ding' at The Maple), Reid and Logan ('ding' at The Maple) were a further one, two and three points respectively behind. Up the Grove Millar after recording a bogey, par, bogey was joined in the lead by Laverty (par, bogey, par) a point ahead of Hood (three pars and Rodgers (three pars. Four points further back came Reid (bogey, double bogey, bogey) and Logan (bogey, par, bogey). In a close finish Laverty with a par and double bogey Won Overall by a point from Millar (bogey, par) and Hood (two pars) and with a better back six Hood won Division 1. Millar finished second and Rodgers with a par and a 'ding' took third place, two further points behind. Reid (two pars) and Logan (bogey, birdie) finished together another two points behind the placings.

In Division 2 at the turn James Logan (16) held a one point advantage over Darryl Robinson (16). Daniel McIlroy (25) was another three points behind with Samuel Bamber (19) a further point back. Approaching the fourteenth tee there was a threeway tie between Logan, Robinson and an improving McIlroy, a point ahead of an improved Bamber. Two pars by Robinson saw him clear of Beechers, two points clear of of Bamber (bogey, par). McIlroy (bogey, double bogey) and Logan (bogey, double bogey) were another point behind. In a very close finish only one point separated the golfers. Robinson finished double bogey, bogey, bogey and held on to win by one point from Bamber (two bogeys, double bogey), McIlroy (double bogey and two bogeys) and Logan (par and two bogeys). Second place went to Bamber with a better back nine and third place was taken by McIlroy with a better back nine.

Congratulations to Josh Hill who has been selected to represent Great Britain and Ireland Boys against the Continent of Europe in Sweden in the Jacques Leglise Trophy at Falsterbo Golf Club on 27th/28th. August 2021.

Congratulations also go to Jordan Hood and Michael Reid who have been selected to represent Ulster in the Inter Pros at Shannon Golf Club from 25th. - 27th. August 2021.