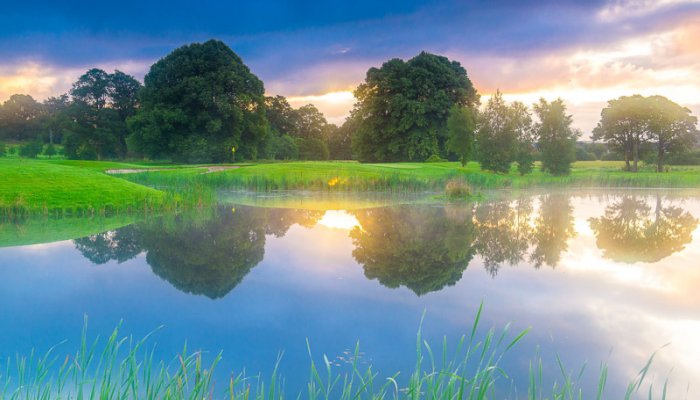 At halfway in the Galgorm Spa and Golf Resort sponsored Stableford played at Galgorm Castle Golf Club David Guest (12) was leading by a point from David Bamford (8). Billy Cull (7) was another point behind followed by Gary Henry (7) and Michael Alexander (5) a further point down. Conor Beggs (4) and Vincent Miskelly (2) were another point down with Kurtis McCartney (3) two points further back. Through The Maple Gault was joined in the lead by Bamford, two points ahead of an improved Beggs. Cull, Henry and Alexander were another point behind. Miskelly and McCartney were a further one and three points respectively behind. Over Beechers and up the Grove Gault (after three pars) had opened up a two point advantage over Bamford (par, bogey, par). Another two points back came Beggs (three pars). He was followed by Cull (bogey and two pars) and Henry (bogey and two pars) a further point behind. Alexander (bogey and two pars), McCartney (three pars) and Miskelly (three bogeys) were a fuyrther one, three and four points respectively down. In a close finish Gault with a par and a bogey came in to Win Overall by a point from Bamford (two pars) in the Overall Runner-up placing. Henry (two pars) and Cull (birdie, bogey) finished together another three points back and Henry with a better back nine won Division 1 with Cull in second place. A further point back Beggs (bogey, par) came third. In fourth place Alexander (bogey, par) was another point behind. Three points further back came McCartney (par, bogey) and Miskelly (two pars).

The Gross was won by Joshua Hill (-4) and the Seniors by Trevor Fleming (8).

At the turn in Division 2 Adrian Atkinson (12) was leading by two points over Adrian McCart (10). Another three points back came Neil McCartney (10), Damien Casey (10) and Ricki Simpson (11). Keith Barkley (12) was a further point back. An improved McCartney and McCart were vying for the lead through The Maple, four points ahead of Atkinson ('ding' at The Fort) and an improved Barkley. Casey and Simpson were close up another point behind. Approaching the Lowlands, after a bogey, par, bogey, McCartney was leading by a point from McCart (bogey, par, double bogey). Simpson had improved with three pars and was another point behind followed by Atkinson ('ding' at fourteen, birdie, bogey) another point away. Barkley (par, 'ding' at Beechers, par) and Casey (par, bogey, par) were a further point back. In a very close finish McCart with a two par finish won by one point from Atkinson (par, birdie) and Barkley with two birdies. Second place went to Barkley with a better back nine. McCartney finished double bogey, bogey in fourth place another point back. Simpson (two bogeys) and Casey (two pars) were a point outside the placings.