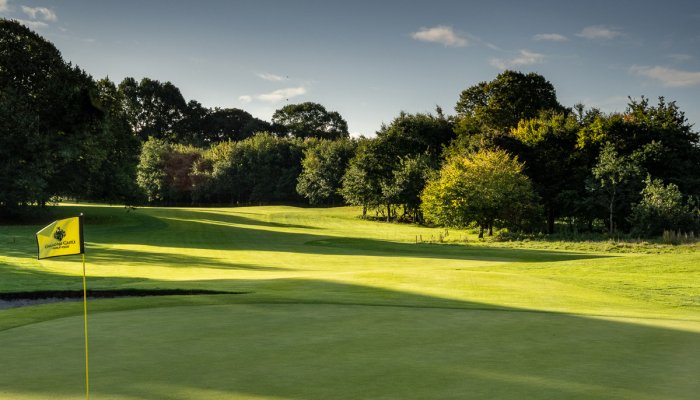 In the June Monthly Medal played at Galgorm Castle Golf Club and sponsored by The Country Garage the eventual winner Rory Sempey playing off eight, was lying in fourth place at the halfway mark three shots behind the leader Joshua Hill (-3). Jonathan Murray (5) and Michael Reid (-3) were one and two shots respectively behind Hill. Hill continued to lead through The Maple by two shots from Murray and Reid. Sempey was another two shots behind. Aaron Steele (9) was a further shot down and Paul Banks (8) and Michael Alexander (8) were close up and still in contention. Approaching the Lowlands and with two holes left to play long time leader Hill after three pars was being hard pressed by Reid (par, eagle, bogey) and Sempey (birdie and two pars). Murray (double bogey and two pars) was a further shot down. Steele (three pars), Banks (three pars) and Michael Alexander (bogey, par, bogey) were a further two, three and five shots respectively down. Sempey returned with two pars to WIN OVERALL with a 67 Nett. Steele (two pars) finished two shots behind and won Division 1 with a 69 Nett. Banks (par, bogey, and Murray (bogey, par) came in together another three shots behind with a 72 Nett. Second place went to Banks with a better back nine with Murray third. Alexander (par, bogey, Hill (bogey, eagle) and Reid (two birdies) finished a further two shots behind on 74 Nett. Reid won the Gross with 71 gr/pts.

Adrian Atkinson (13) held a slender one shot advantage over John McCarry (11) and David Murray (11). Malachy Bellew (10), Cole Henderson (10) and Matthew Laverty (13) were another one, two and three shots respectively further back. At The Maple Henderson, after two birdies and two pars, joined Atkinson (birdie, par, double bogey, par) in the lead two points clear of McCarry. Bellew, Murray and Laverty were another shot behind. Approaching the Lowlands, Henderson, with two pars and a bogey, emerged as the sole leader by one shot ahead of McCarry (bogey, par, birdie) . Atkinson (double bogey, bogey, par) and Bellew (birdie, par, bogey) were another shot behind. Murray (bogey, birdie, bogey) was a further shot away followed by Laverty (two bogeys and a par) another shot down. Henderson finished with two pars for a 68 Nett and was joined by McCarry (two pars)for a 68Nett but with a better back nine Henderson won the OVERALL RUNNER-UP placing. McCarry won Division 2 a shot ahead of Atkinson (par, double bogey) in second place with a 69 Nett. Murray (two pars) 70 Nett and Laverty (bogey, par) 70 Nett were another shot behind. Murray won the Seniors with a better back nine and Laverty finished third in the Division.

At the start of the inward nine James Walker (18) was two shots to the good from John Wilson (16). Chris McBurney (18) was another shotr behind with Alan Knox (21) a further four shots down. Walker continued to lead through The Maple by a shot from Wilson and McBurney. Knox was making headway slowly and was another two shots behind. Up the Grove Wilson was leading by a shot from McBurney with Walker another shot behind. Four shots further back came Knox. Wilson finished with two pars to win by one shot (68 Nett) from Knox (two pars) (69 Nett) and McBurney (two bogeys) (69 Nett) andwith a better back nine second place went to Knox. Walker with two bogeys finished another shot (70 Nett) behind the placings.

Ian Henry (23) was leading by two points at the halfway mark from Andrew Ferguson (20) ('ding' at Spences) and Samuel Campbell (20). Aidan Donnelly (24) was another four points behind due to mishaps at the opening hole, Broadmeadows and the Sanctuary. At the Devils Elbow Campbell was the new leader a point ahead of Henry. Ferguson was two points further back with Donnelly another five points back. Through the Grove Henry after a par, birdie par had a two point advantage over Campbell (par, bogey, par) who held a two point advantage over Ferguson (three pars). Donnelly (two pars and a birdie) was a further three points back. What a finish lay ahead with two holes left to play! Henry 'dinged' at the Lowlands and was joined by Campbell with a bogey and Ferguson drawing ever closer with a par a point behind. Donnelly (birdie) was closing but had he left it to late with only one to play. In a very close finish Henry with a bogey, Campbell with a bogey and Ferguson with a par finished together and with a better last six first place went to Ferguson, second place to Campbell with a better back nine and Henry in third place. Donnelly parred the last to finish two points behind the placings.