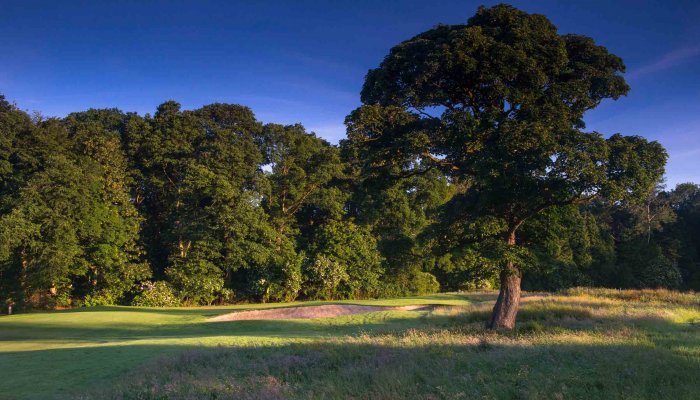 There was a very close and exciting finish to Division 1 with only one point separating the first six golfers. Through The Niuc Jim Wilson (5) was leading by a point from Joel McNeilly (1) with Peter McMullan (4), George Small (4) and Norman Nicholl (4) another point behind. Keith Barkley (5) was a further point down. Wilson followed with two bogeys and was being hard pressed for the lead by McNeilly (two pars), McMullan (par, bogey), Small (bogey, par) and Nicholl (par, bogey) a point behind. Wilson finished par, double bogey, par and was joined by McMullan (par, bogey, par) and with a better last six first place went to McMullan with Wilson second. A point behind, Small (two bogeys and a par), McNeilly (three pars), Nicholl (par and two bogeys) and Barkley (birdie, bogey, par) finished together and with a better last six third place was taken by K.Barkley.

Garry Robinson (9) opened briskly in Division 2 with four pars to lead by two points from Austin McGillian (9). Garth Wilson (7) was another point behind with James Andrews (8), Gary Carleton (8) ('ding' at the second) and Kevin Duffin (9) ('ding' at the third) a further one, two and four points respectively behind. Robinson continued to lead through The Treasury after a par, double bogey, par by two points from McGillian. Andrews (bogey and two pars) was another two points behind and a further point away came an improving Duffin with three pars and Wilson (three bogeys). Carleton (birdie, double bogey, bogey) was another point in arrears. Robinson increased his lead over the closing two holes and finished bogey, par to win by three points from Andrews (two pars). A further two points back came McGillian (bogey, 'ding'), Duffin (bogey, par). Wilson (bogey, par) and Carleton (bogey, birdie). Third place went to Duffin with a better last six.

Brian McFall (14) set the early pace in Division 2 and after opening with two bogeys and a birdie held a one point advantage over Aaron Pattison (10). William Kennedy (10) was another point behind with Colin Thompson (9) a further point back. Approaching the Grove Pattison, after a run of par, bogey, par emerged as the new leader by a point from Kernnedy (bogey and two pars) with McFall (double bogey, bogey, double bogey) and Thompson (bogey and two pars) another point behind. In a close finish Pattison with three bogeys held on to win by a point from McFall (bogey, double bogey, bogey), Kennedy (par, double bogey, bogey) and Thompson (two pars and a double bogey) who finished together. Second place went to Thompson with a better last six and with a better last six third place was taken by Kennedy.