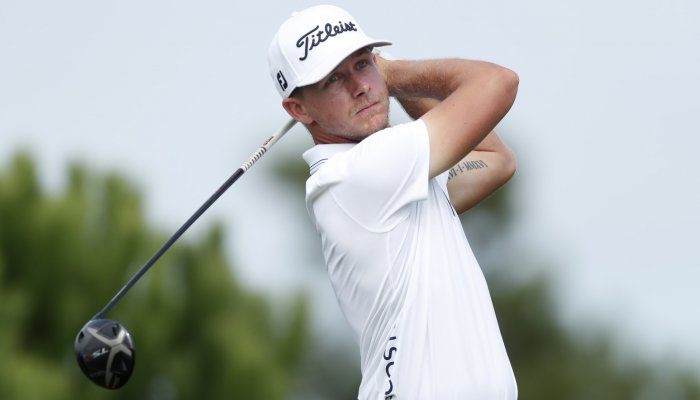 Maverick Antcliff completed a roller coaster morning with a closing eagle to join Aaron Rai at the top of the leaderboard as the delayed second round of the 2020 Dubai Duty Free Irish Open was completed on Saturday.

After a 90 minute delay due to frost at the start of day two at Galgorm Spa & Golf Resort, 27 players were left to complete their second rounds on Saturday morning, with Australian Antcliff having more work to do than most having gone out in the penultimate group.

Rai had completed a level par 70 to set the overnight target at five under, but he was soon joined by Antcliff.

The 2019 China Golf Tour Order of Merit winner had eight holes remaining and quickly birdied the 11th and 13th to join Rai at the top of the leaderboard.

Bogeys on the 14th and 15th followed but the 27-year-old made his eagle on the par five last to card a 65 and once again sit at the top of the pile.

Jordan Smith had also started the day at three under and the Englishman had a big finish of his own, going bogey-birdie-birdie over his remaining three holes to sit just one shot off the lead after a 71.

Countryman Toby Tree was in the group behind and he made a birdie on the last to sign for a 70 and join Smith in moving to four under alongside another Englishman in Robert Rock, South Africa's Dean Burmester and Swede Joakim Lagergren, all of whom had completed their rounds on Friday.

None of the early starters could make a move into the top ten, with Friday finishers John Catlin, Ewen Ferguson, Justin Harding and Scott Hend making up the group two shots off the lead.

The cut line did not move from five over, meaning local heroes Padraig Harrington and Shane Lowry missed the weekend by one and two shots respectively.

Due to the delay, the third round would be played in three balls off the first and tenth tees.