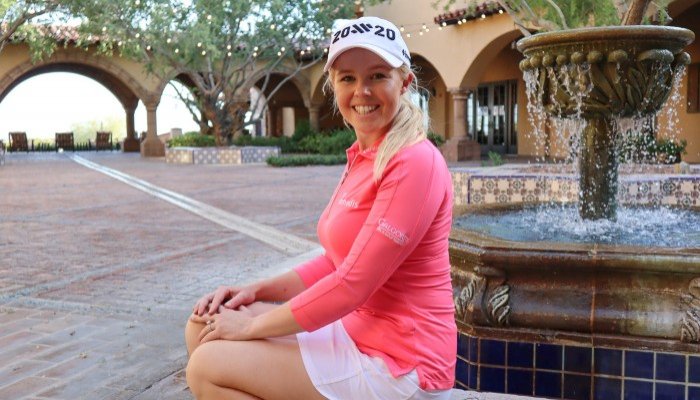 Meadow is one of Ireland’s leading professionals who has been making her mark on the global stage since moving to the United States with family when she was 13 to pursue her dream of becoming a professional golfer.

Today, the 28-year-old is living out that dream on the LPGA Tour, the top tour in the women’s game. The Jordanstown native continues to fly the flag for women’s golf in Ireland and will enjoy an intrinsic link to home as the new Touring Professional for Galgorm Spa & Golf Resort.

“I am absolutely delighted to be partnering with Galgorm Spa & Golf Resort. After staying a few times last year, it is easily one of my favourite places in the world,” said Meadow, who is currently based in Arizona in the United States.

“Not many people get the opportunity to represent one of their favourite places in their home country on a world stage. It is the perfect place to stay when visiting Northern Ireland. Thank you to Galgorm Spa & Golf Resort for believing and supporting me.”

One of Meadow’s reasons for returning to Northern Ireland in 2019 was to compete in the brand new ISPS Handa World Invitational Men | Women, played at Galgorm Spa & Golf Resort and Massereene Golf Club. Not content with just letting her Irish fan base see her in action, Meadow won the prestigious event in fine style after holding off a strong field that included players like England’s Charley Hull and European Solheim Cup Captain Catriona Matthew.

“It was fantastic to win at home, especially here at Galgorm,” Meadow said after her 2019 win. “I was inspired by Shane (Lowry) winning The Open at Royal Portrush. I just wanted to show fans here at home just how good I am for I hadn’t competed in Ireland since turning professional.”

Colin Johnston, Managing Director Galgorm Spa & Golf Resort, said: “Stephanie is a talented professional who demonstrates real commitment and application to achieving success and we are thrilled to have Stephanie as our Touring Professional.

“Her profile in the women’s game in the United States and competing around the world gives us an incredible opportunity to showcase The Resort and place Northern Ireland on the worldwide stage. We look forward to working closely with Stephanie and wish her every success on the course when things return to normality.”

A stellar amateur career included breaking all sorts of playing records during her time at Alabama University before joining the paid ranks in 2014. Meadow made a sensational professional debut by finishing third in the 2014 US Women’s Open at Pinehurst.

She also won the 2018 IOA Championship on the US Symetra Tour and cites representing Ireland at the 2016 Olympics in Rio as one of the highlights of her career so far. Just now, Meadow is looking forward to a return to competitive action.

“It has been a challenging year for everyone. We are hoping to get back playing by the end of the month. Our schedule is pretty packed until December and cannot I wait to get going and get back to some sort of normality,” added Meadow, who despite the Covid-19 pandemic got engaged to fiancé Kyle in recent months.

Gary Henry, Managing Director, Galgorm Castle Estates, said: “Although Stephanie spends most her time in the States, she continues to help grow the game closer to home as an ambassador for the 20x20 initiative to raise the profile of women in sport. Stephanie has long been an inspiration for young golfers here in Ireland.”

“We are delighted to have this new agreement with Stephanie and we wish her every success as the new Touring Professional of Galgorm Spa & Golf Resort.”

Last game, who's in your fourball? Kyle (fiancé), Arnold Palmer and Annika Sorenstam

Favourite restaurant? Any Indian. It’s the first thing I get when I’m home (along with a Galaxy bar and an Ulster fry!)

Not golfing, what are you doing away from the fairways? Working out, yoga, cooking and spending time with my dog Dallas

WHAT’S IN THE BAG?